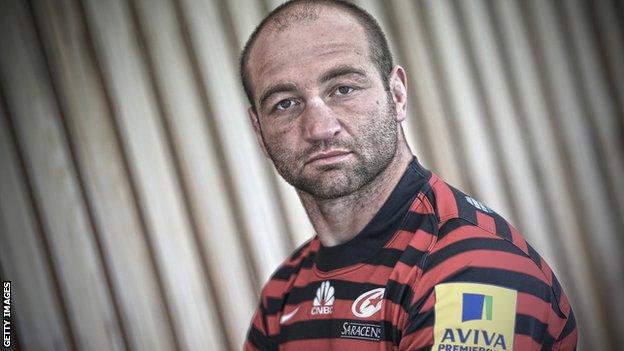 A former England international, well used to the spotlight but rarely comfortable in it, respected and revered by his peers, and set to play his final game of rugby union this weekend.

On Saturday, just hours before Jonny Wilkinson strolls out for Toulon at the Stade de France ready to take on Castres in the Top 14 final, Twickenham is to host another fond farewell.

Having already clocked up more top-flight appearances than any other player, Steve Borthwick will add just one more to his impressive tally of 264 when he leads out Saracens in English rugby's end-of-season showpiece.

What his peers say about him

"He's been a huge part and hugely responsible for leading us to this final." - Saracens director of rugby Mark McCall

"He's our leader. I think he's an unbelievable player, but more so he's a strong individual who really is the fulcrum of this team." - Saracens centre Brad Barritt

"He's a special guy and, in my heart, he's done a huge amount for this game and for this club." - Saracens prop Matt Stevens

"He's an incredible leader of men. He accepted everyone, every different personality type, every different sort of character, as long as they put in for the team. When Borthwick left Bath it was one of biggest incidents ever to happen at Bath Rugby." - Ex-Bath team-mate David Flatman

The match against Northampton Saints, which will decide the next destination of the Premiership trophy, will be the 34-year-old lock's last.

"The players keep reminding me," Borthwick told BBC Radio 5 live. "There's lots of lasts - the last this, the last that, the last Tuesday afternoon training session."

The last instruction barked at a team-mate, the last demand for better from those around him, the last persuasive word or two in the direction of a referee.

Borthwick is "the nicest man in the world off the field", insists former Bath and England team-mate Mike Tindall, but also a "nightmare" on it.

"He's always in your ear, always in the ref's ear," Tindall explained. "When we were at Bath, for a young man who came in when he did, he just wanted to boss everything.

"He'd tell seasoned internationals where they were going wrong - he set a high standard all the time that he expected people to live up to. And he wasn't scared of telling whoever it was if they weren't living up to it.

"He is intense because, like Jonny, he wants to succeed and he always wants to make sure he's fully prepared."

Born in Carlisle, Borthwick made the move south, via Preston Grasshoppers, to join Heineken Cup holders Bath in 1998.

But his arrival at The Rec, aged 19, coincided with the beginning of a 10-year trophy drought for the club - a run only brought to an end when Borthwick led them to Amlin Challenge Cup glory at the expense of Worcester in what would be his final Bath appearance in 2008.

Despite enduring a relatively barren period in the West Country, his performances in blue, black and white earned him a Test debut against France in the 2001 Six Nations.

It was to be the first of 57 caps for his country - 21 one of them during an up-and-down spell as captain, which included heavy defeats by New Zealand and South Africa in the 2008 Autumn Internationals and a third-placed finish in the 2009 Six Nations.

But, although his omission from Clive Woodward's World Cup-winning squad in 2003 would also come as a disappointment, Borthwick is only positive about his time in an England shirt.

"As a boy you're watching England teams play and you want to be able to do that one day and I've done it more than 50 times and captained my country," he said. "That's incredible for me to have had those opportunities.

"It really is a privilege to play for your country. I look back and think I gave the very best I could and worked as hard as I could to put in a performance that does the jersey proud and does the England team proud.

"When you're wearing the shirt you just do the very best you can."

Following his exit from Bath, Borthwick decided to join the growing Saracens dynasty, where he would begin as co-captain alongside Andy Farrell before going on to carry the mantle by himself a year later.

The move brought about the first Premiership title of his career in 2011, but it would again be a period punctuated by near misses - semi-final losses at home and in Europe last season, and defeat by Wilkinson's Toulon in the Heineken Cup final less than a week ago.

Now he will be hoping to end his time with Saracens in the same way he did so with Bath.

"I'm in a fortunate position that I was able to say when I was going to retire, and make that decision on my terms quite a few months ago," said Borthwick.

"All we can do is focus on being the best team we can be this weekend and put in a performance we're proud of. If we're fortunate enough to win then brilliant.

"But Northampton are an excellent team and we're going to have to be at our very best."

Sixteen seasons as a professional rugby player - but apparently not in need of any great time away from the sport.

Once Saturday is over, Borthwick will become Japan forwards coach, working under ex-Saracens director of rugby Eddie Jones, who is now head coach of the Cherry Blossoms. It is a switch that has been some time in the planning.

"We can't play rugby all our lives, and Eddie gave me the opportunity to go and work with the Japan team, as I've done when I can for the past couple of years," Borthwick explained.

"It's really exciting - they're a team that's really ambitious and work exceptionally hard, and have a fantastic head coach that's going to be incredible for my development as a coach.

"I just want to learn as much as I can and develop, and this first step is incredibly exciting."

There will be live text commentary of Saturday's Premiership final on the BBC Sport website, starting at 13:45 BST with a review of the domestic season.