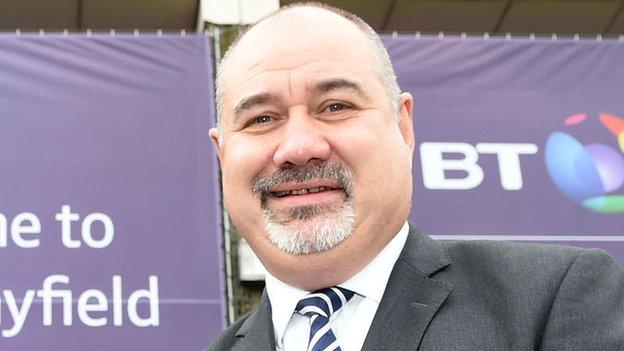 Scottish Rugby will not use funds from a £20m naming rights deal to start a third professional side, chief executive Mark Dodson has said.

Scotland and Edinburgh's home ground is to be renamed BT Murrayfield Stadium as part of a new sponsorship deal.

Glasgow Warriors are Scottish Rugby's other professional side, with Border Reivers having been closed in 2007.

"Our view is that this money primarily will be actually building the grassroots of our game," said Dodson.

"Our club game needs an injection of cash. It's been a very difficult time for club rugby in general and we're going to use some of this money to give them a real fillip and try to boost club rugby in Scotland as well as the academies.

"[The deal will also take] the women's game forward but also bolsters our pro-teams."

Edinburgh and Glasgow currently compete in the Pro12 with four teams from Ireland, four from Wales and two from Italy.

With double the amount of sides from which to draw prospective internationals, Ireland and Wales have performed consistently better in the Six Nations than their Scottish and Italian counterparts.

And changes to European competition mean only one of the Scottish sides, Pro12 finalists Glasgow, will be competing in the new European Rugby Champions Cup next season.

Dodson has previously held talks with head of Aberdeen Asset Management Martin Gilbert about the possibility of setting up a new professional team in Aberdeen.

But the chief executive sees the Murrayfield naming rights deal primarily as a means to "future-proof" the game in Scotland.

"This hopefully will see us on our journey to make Scotland a competitive nation in world rugby," he added.

"This is a major deal, probably the biggest deal in Scottish sport in recent history."