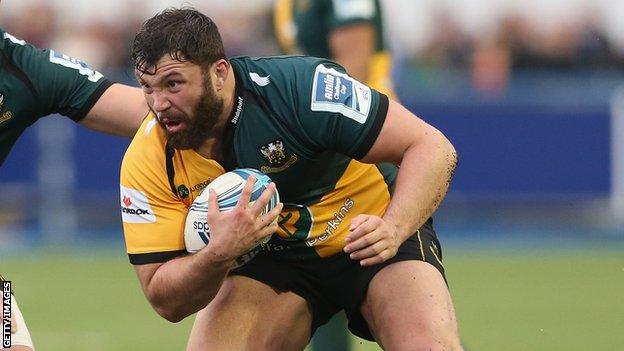 Northampton prop Alex Corbisiero is hoping for a dream end to the season by winning Saturday's Premiership final.

Saints won the Amlin Challenge Cup last week and can complete a European and domestic double by beating Saracens.

Corbisiero told BBC Radio Northampton: "This game is everything to the club. It's a big opportunity to win the Premiership which is the main reason I came to a club like Northampton Saints.

Wasps at the double

London Wasps are the only English side to complete a Challenge Cup and Premiership double, doing so in the 2002-03

"On the back of a trophy last week it would be a fairytale ending."

It has been a difficult debut season at Northampton for Corbisiero.

The England and British & Irish Lions forward had knee surgery in November, having played only five times for the club he joined from London Irish in the summer.

American-born Corbisiero returned to action at the beginning of May, coming off the bench against London Wasps, and made his first start in almost eight months in last week's Challenge Cup success over Bath.

"There were some dark times this season. If seems like you're sitting still in quicksand waiting for your body to heal," he said.

"There were times when I didn't know if I was going to play before the end of the season or not. I'm just happy I'm back.

"To play in a Premiership final - what a way to end a horrendous period of my life."

Corbisiero will not join England's tour of New Zealand this summer, so as not to put too much strain on his knee during the recovery.

So his last contribution of the season will be for Saints as they try to beat Heineken Cup runners-up Saracens at Twickenham and win their first Premiership title.

Corbisiero has featured in a Premiership final before, playing for Irish in the narrow 10-9 defeat by Leicester in 2009.

"From that occasion I learned to not leave anything in the locker room," he said.

"It was frustrating losing 10-9 and we should have taken some penalties. So you must make the most of your opportunities."

There will be live text commentary of the Premiership final on the BBC Sport website, starting at 13:45 BST with a review of the domestic season.