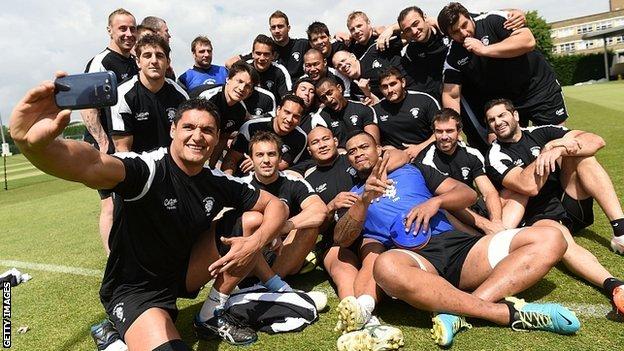 Barbarians coach Dean Ryan has challenged his players to restore the reputation of the famous side in Sunday's game against an England XV.

The iconic invitational outfit suffered heavy defeats by England and the Lions last year, raising questions about their relevance in the modern game.

"Everyone has a responsibility to make this fixture competitive," said Ryan.

"The history of the Barbarians is there, but the here and now needs to be looked after."

The Barbarians are drawn from elite players from all over the world, and the team has a rich social history from the game's amateur days and a reputation for playing attractive running rugby.

"We're aware of times when that hasn't gone well, and this group have articulated that they are pretty keen to separate themselves from that," added Ryan.

"But it must be about balance: We haven't turned up with 45 computers and analysed England, it's not about that either."

Leicester lock Graham Kitchener will captain an inexperienced England XV, while Argentine flanker Juan Manuel Leguizamon will lead a Baa-Baas squad drawn from nine different nations with more than 700 international caps between them.

England head coach Stuart Lancaster has picked a separate 30-man squad to tour New Zealand, with players from Saracens and Northampton set to be added after the Premiership final on Saturday.