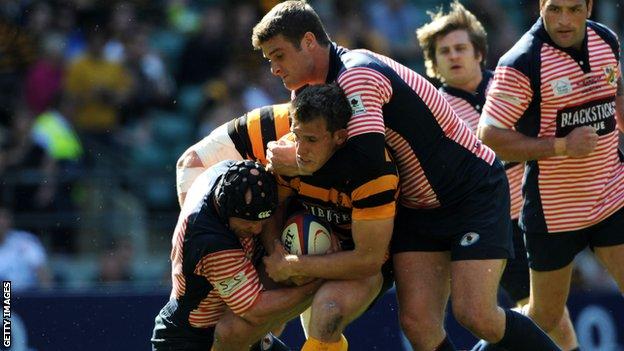 Cornwall have made just one change to their starting line-up as they look to avenge last year's County Championship final loss to Lancashire at Twickenham.

Oli Brennand replaces Phil Baines on the wing, while Ben Black comes in for Dan Birchall in the front row.

Lancashire, who are aiming to become county champions for a record 23rd time, won last year's contest 35-26 in a close-fought encounter at Twickenham.

"They are unique experiences, particularly at Twickenham," he told BBC Radio Lancashire.

"Experience has a limited effect. Cup finals are taken on their own merit.

"This is as special to me as the first one. You've got to treat them all as if they are your last.

"I want the players to relish the prospect of playing in a final at Twickenham, which very few players get the chance to do."

Cornwall have recovered well since their defeat in 2013, and are unbeaten under their new management team of Graham Dawe and Ian Morgan.

But they face a Lancashire side who have made it through to each of the last five finals, winning four of them.

"Graham and I aren't focusing on that because this is our first year. We like to face a challenge head on and we see this as our first major challenge," Morgan told BBC Radio Cornwall.

"History's not going to play on our minds too much, it's just about us getting the victory.

"A lot of this squad were there last year when they lost, we need to wipe that from their minds.

"Sunday's a completely clean slate, we're starting from fresh, it's Cornwall against Lancashire, forget last year and move on for this year."

Last year was Cornwall's first County Championship final since 2001, so it was a new experience for the players.

This year, captain Ben Hilton says they will not be overawed by the occasion.

"Most of us have been there before, it's not too much of a surprise what's coming," he said.

"The coaches have been there before, so there's a lot of experience around the squad so it should be a bit more manageable."

And Hilton says the support of Trelawney's Army - Cornwall's dedicated fans - could be the difference between the two sides.

"Last week the roar at Hertfordshire, you'd have thought we were at home.

"Speaking to some of the Lancashire boys that played last year, they're so happy we're there again because it feels like you're playing in the World Cup final because the Cornwall supporters bring it and bring it loud."