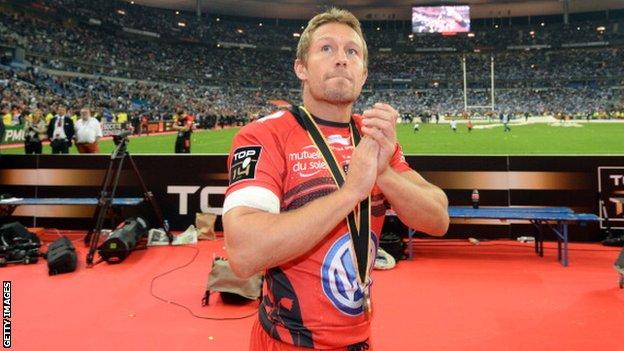 Jonny Wilkinson ended his career with a trademark kicking display that landed all but three of Toulon's points as they won the Top 14 final in Paris.

The former England fly-half starred in their 18-10 victory over Castres.

The 35-year-old kicked four penalties and a drop-goal reminiscent of his winning kick against Australia to win England the World Cup in 2003.

"I've been here five years and it is impossible to put this feeling into words," said Wilkinson.

"I've spent half my life with a ball. It's going to be a huge shock after rugby but I'll have a lot of good memories with the whole of the team here.

"All I can do is thank everyone in the group, the coaches - it's incredible to explain; it's just a pleasure."

Emotions got to Wilkinson a few minutes after the final whistle at the Stade de France as he walked around with his head in his hands, as it sank in that his playing career was over.

He had already been mobbed by teammates as the stadium speakers blasted out `God Save the Queen.'

Wilkinson told BBC Sport: "Part of me wants to jump up and down and run around because it is such a great day, but something is holding me back.

"It is wondering what the hell I am going to do now. It's a scary time. It happens to everyone and you need to understand your time runs out and you don't all get the chance to go out on a good moment."

Toulon and France centre Mathieu Bastareaud, 25, said of Wilkinson: "This is what I'll be able to tell my grandchildren, that I've played with a great man.''

Wilkinson had also led Toulon to the Heineken Cup last weekend with a 23-6 final win over Saracens in Cardiff.

He won 91 caps for England during his 17-year career and will now join the coaching staff at Toulon, the club to which he moved in 2009.

Wilkinson said earlier: "I don't feel I'm as effective, which is behind the decision. It's important not to stand in the way of guys who are the future.

"I feel like I have got lots of positive stuff to give, but I think that maybe needs to come from outside now and not from on the field.

Wilkinson opened the scoring with an eighth-minute penalty but Castres responded through Max Evans, who ran almost the length of the field to score the game's only try.

However, Wilkinson's drop goal gave Toulon a 12-10 half-time lead, and he and fellow England international Delon Armitage landed successful kicks after the break to confirm victory.