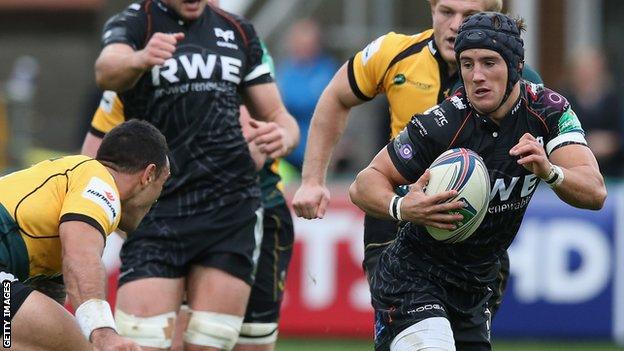 Matthew Morgan can play an important role for Wales as an impact player off the bench in South Africa, says ex-Wales flanker Martyn Williams.

Uncapped Ospreys fly-half Morgan was the surprise inclusion in the 32-man Wales squad.

The 22-year-old impressed after coming on as a second-half replacement at fly-half for the Possibles in the defeat by the Probables in Friday's trial.

"Matthew Morgan had a great 20 minutes when he came on," Williams said.

"He can do things when the games open up."

Wales face a warm-up match against Eastern Province Kings in Port Elizabeth on 10 June followed by Tests against South Africa in Durban on 14 June and in Nelspruit a week later.

At 5ft 8in and weighing a little over 11st, Morgan has been largely an Ospreys understudy to Wales incumbent Dan Biggar and 2013 World Under-20 player of the year Sam Davies and will join Bristol next season.

Scarlets wing Jordan Williams, 20, is another uncapped player in the squad who belongs to a style of play at odds with the global trend for large, powerful players.

"But on the hard grounds, maybe when the game's broken up in the last 20 minutes, Jordan Williams and Matthew Morgan are options off the bench we haven't had in the past."

"When you look at the squads that are going overseas, Wales look the strongest," said Wallace, a member of the Lions team which won a Test series against the Boks in 1997.

"Yes, you've no [Richard] Hibbard and Sam's [Warburton] leadership is going to be missed, but it's a very strong side.

"When you look at the problems the Springboks have with injuries, especially in midfield, you think that physical Welsh backline should be able to go down there and hold their own.

"And remember the basis of the Welsh team went down to Australia and won that Test [series] for the Lions so magnificently.

"If they're looking at winning a World Cup they should be targeting at least one of these Tests and Durban at sea level. They've got a very good shot at it.