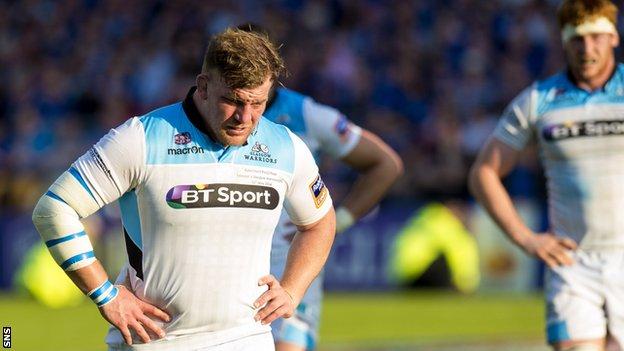 Glasgow Warriors will put their crushing Pro12 final defeat by Leinster behind them and be future champions, coach Gregor Townsend has vowed.

A 20-point second-half surge in Dublin ensured the Irish side won 34-12 to become the first to retain the title.

"We were just not good enough on the day," Townsend told BBC Scotland.

"We've just got make sure we learn the lessons, which we have done every year and we've got better and better, and we come back here and win it next time."

But it was Leinster, who had topped the league table ahead of the Scots, who finished the stronger and scored all four of the game's tries to secure victory in legendary Ireland centre Brian O'Driscoll's final game before retiring.

"It was a tremendous occasion," said Townsend. "The supporters, the numbers that came, was fantastic. The noise they made created a wonderful atmosphere.

"We were in the ascendancy for a lot of the first half - we had a slight wind behind us as well - and got inside their 22 on two occasions but didn't finish off what looked like certain tries.

"Maybe that affected us emotionally because we didn't play with the same impact in the second half and we just ran out of steam and probably tried to play too much rugby at the end."

For Scotland trio Chris Cusiter, Moray Low and Ruiridh Jackson it was their final game before joining new clubs, but Townsend was pleased with the progress being made at Scotstoun and with the young replacements coming through.

"A huge step forward," was how he summed up this season. "We've made real progress to get to a final.

"The players have played really well and this group are going to be here for the future."