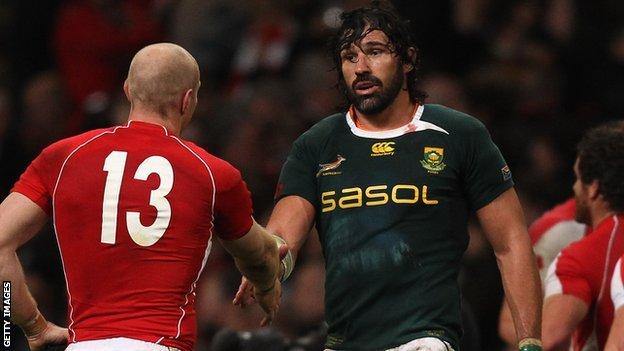 South Africa have named seven uncapped players in a 36-man squad for the June Tests against Wales and Scotland.

Springboks captain Jean de Villiers, who is out with a knee injury, is not included, while lock Eben Etzebeth has been given more time to fully recover from a foot injury.

Vice-captain Adriaan Strauss is also absent having been suspended for three matches, and the experienced Jaque Fourie has been ruled out with an ankle injury.

But he was forced out by a knee injury and replaced by Golden Lions fly-half Boshoff.

"It's never easy starting the international season without a number of key players, but it's the same for our opponents as well and there are no excuses," said Springbok coach Heyneke Meyer.

"We simply have to hit the ground running this week and make sure we start the season as well as possible."

The Springboks face Wales on 14 and 21 June before hosting Scotland on 28 June in Port Elizabeth.