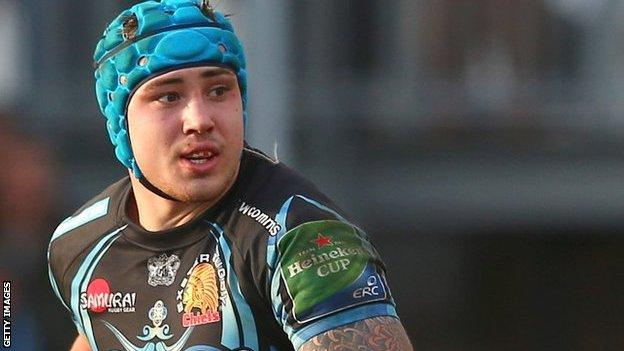 England winger Jack Nowell has signed a new contract with Exeter Chiefs to run until 2017.

The 21-year-old Cornishman, ruled out of the summer tour to New Zealand after undergoing knee surgery, made his senior debut for the Chiefs in 2011.

He has so far won five caps and scored his first England try against Italy in this year's Six Nations.

Ultimately this period will be very good for him as it will allow him to rest up, recuperate and work on an area of concern with his knee

"Ever since I joined, the club have always looked after me and helped me to progress to where I am now," he said.

"I think with this summer and not going on tour or playing the Barbarians, it's going to allow me to get on top of my knee issues.

"I've had the operation, which went really well, and now I'm fully focused on getting myself fit and raring to go for next season."

Nowell is the latest player to commit himself to a new deal with the Chiefs, following skipper Dean Mumm, Sam Hill, Luke Cowan-Dickie and Dave Ewers.

Head coach Rob Baxter said Nowell's decision was "fantastic news" for the Devon club, who won their first major trophy by beating Northampton in the LV= Cup final in March.

"It's great for us to know that we are going to be working with this group of players for the next few years - and it's also a great indicator for us as a club that these players want to stay with us, they are comfortable with us and that they know we can help them not only thrive as club players, but potentially as international players as well," he continued.

Whether Nowell will be fit for the start of the 2014-15 Premiership season is not yet known.

"We will monitor that closely, but ultimately this period will be very good for him as it will allow him to rest up, recuperate and work on an area of concern with his knee which he hasn't been able to do flat out for a few seasons now," added Baxter.

"Personally, I'm really looking forward to getting Jack back fighting fit, he's around the club most days working really hard, being very professional and I have no doubt we will see an even better Jack Nowell next year."