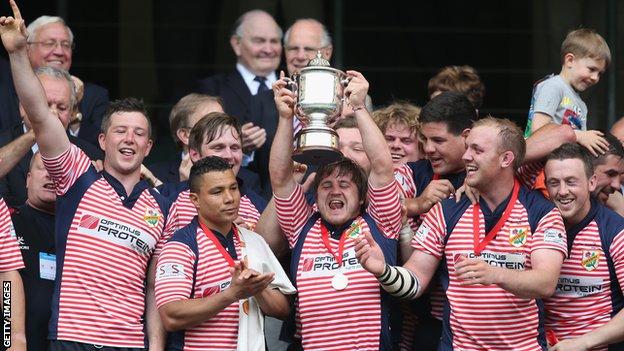 Mark Rylance had given them the lead before tries from Lewis Vinnicombe and Jamal Ford-Robinson put Cornwall clear.

But a three-try burst in 10 minutes turned the game around and Burtonwood later went over to seal the victory.

It left Cornwall's band of 4,000 travelling fans still waiting for their fourth county title, 15 years after they last won at Twickenham.

Their side had the best of the early territory, but failed to make it count as Kieron Lewitt missed a fifth minute penalty.

Johnson made no mistake five minutes later as he put Lancashire in front when Cornwall were penalised for offside.

The Black and Gold restored parity when Lewitt put over a penalty from close range after 13 minutes, butt Lancashire hooker Rylance crashed over in the corner from a lineout midway through the first half for the opening try.

Cornwall were penalised for offside and Rylance finished off a training ground routine after a kick to the corner, with Johnson adding the extras to put his side 10-3 ahead.

But Lancashire struggled to repeat the free-flowing rugby that had taken them to four championships in the last five years, as their opponents dominated the rest of the opening period.

Lewitt kicked a penalty before an excellent solo try by winger Lewis Vinnicombe, who collected a Greg Goodfellow pass and sublimely chipped the ball over the full-back before gathering his kick to score in the corner.

Despite a difficult angle, Lewitt added the extras and Lancashire's task was made more difficult on 30 minutes when Paul Arnold was sin-binned for slapping Tom Rawlings in the face.

His indiscipline allowed Lewitt to extend Cornwall's lead and they were soon in again as prop Ford-Robinson bulldozed his way through two tackles and over the line after picking the ball up 15 metres from goal.

Launceston full-back Lewitt converted and took his tally to 16 points eight minutes into the second half as he chipped home a penalty from 15 metres after an offside.

But Stewart forced his way over in the 51st minute to launch the Lancashire fightback after some heroic defending by the Cornish on their own try-line.

And seven minutes later skipper Johnson crossed in the corner after a great break to bring his side within four points, although he missed the conversion.

Cornwall were unable to stem the tide and three minutes later Lamprey went in on the left after good work from Burtonwood to put Lancashire 29-26 ahead.

Burtonwood touched down from close range 10 minutes from time after another period of sustained pressure on the Cornwall line, and Johnson's conversion gave them a 10-point margin as they retained the Bill Beaumont Cup.