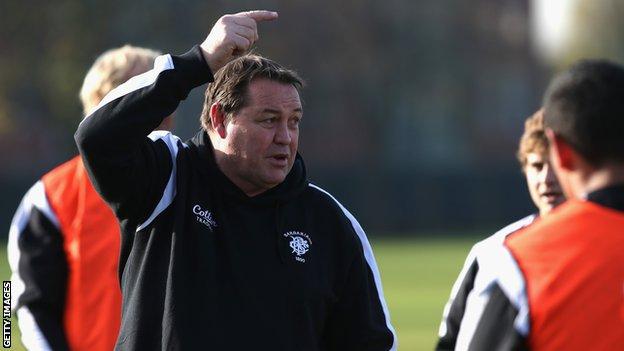 New Zealand head coach Steve Hansen says England are the most improved team in Test rugby, ahead of next weekend's first Test in Auckland.

Hansen named his 31-man squad on Sunday for the three-Test series against Stuart Lancaster's side.

"Stuart has built depth in his side and a strong culture," said Hansen, whose experienced squad is led by World Cup-winning captain Richie McCaw.

"They will be a formidable opponent and one we are very excited about playing."

Hansen is still without fly-half Dan Carter, who has taken a sabbatical from the sport.

Centre Malakai Fekitoa and lock Patrick Tuipulotu are in the All Blacks squad for the first time, while back rows Jerome Kaino and Victor Vito return.

England's preparations for Saturday's opening Test at Eden Park have been hampered by a lengthy injury list and the absence of players from Premiership finalists Northampton and Saracens.

"Those who think England will be fielding a weak side in the first Test are completely underestimating the quality of depth in the England squad," said Hansen.

"This series gives both teams a great opportunity to put a stake in the ground, not only this year, but also for the 2015 World Cup."