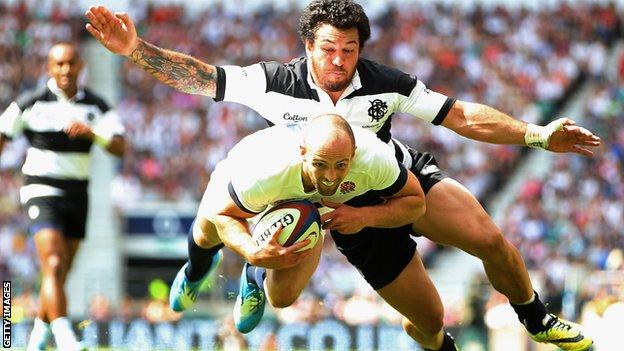 Dave Ewers and Charlie Sharples's tries helped England lead 18-14 at the break, while Benson Stanley and Juan Martin Hernandez crossed for the visitors.

But the invitational side then took control with Mamuka Gorgodze scoring at the start of the second half.

The hosts responded with Henry Slade's try, but Gear scored twice to settle an exciting contest.

England head coach Stuart Lancaster has picked a separate 30-man squad to tour New Zealand, with players from Saracens and Northampton now to be added after Saturday's Premiership final.

The Barbarians certainly rose to a challenge from coach Dean Ryan to restore the reputation of the team, drawn from elite players from all over the world, after heavy defeats by England and the British and Irish Lions over the past two years.

But after an impressive start they trailed when Wasps scrum-half Joe Simpson made a good break and Exeter forward Ewers burst over from a couple of yards out.

Five minutes after the break, Georgia and Montpellier number eight Gorgodze burst off the back of a dominant scrum and barged through two tackles for a try that was eventually awarded by the television official.

Famed for their positive style of play, the Barbarians were booed for kicking at goal but James' penalty extended the advantage to 24-18.

England hit back when Bath back Devoto's break led to Exeter fly-half Slade getting over in the corner.

But Toulouse winger Gear extended the lead when he ran around Elliot Daly to finish a counter-attack and then added a fifth try for the Barbarians with a fine solo run.