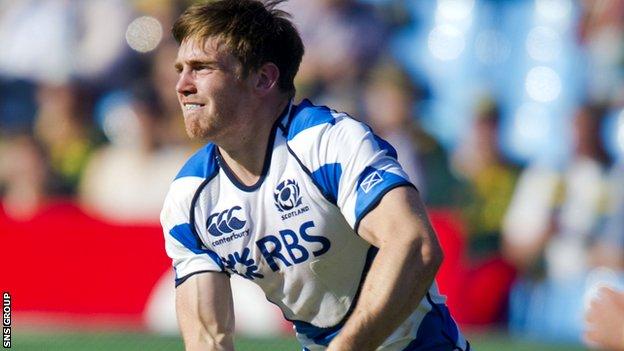 Tom Heathcote has cut short his Bath contract to join Edinburgh on a one-year contract in the search of regular first-team starts and Scotland caps.

And he only has two Scotland caps since making his debut in 2012.

"With Fordy obviously playing so well, it was going to be difficult for me to get any consistent run in the starting team," Heathcote told the BBC.

"So, even if he is away with England and I get a game here and there, it is when I would want to be away with Scotland.

"So, in the long run, it probably limits my chances of playing internationally."

Heathcote's switch comes in the week when Vern Cotter officially begins his tenure as Scotland head coach and the Inverness-born fly-half is hoping a change of management will enhance his cap chances.

But he admitted: "The main thing is performing well and getting in that Edinburgh team.

"I have a long way to go to impress and win that Scotland shirt. I am ready for the new challenge."

Heathcote, who had represented England at under-20 level, has spent his whole rugby career at Bath and still had a year left to run of his Bath contract.

"It is the club I grew up near and supporting, so I will miss the club and the city," he admitted.

"It was a pretty big decision for me to make having been at Bath since I joined the academy at 15.

"At the same time, I know it is the right thing to do, to go to Edinburgh coming off a frustrating season I've just had."

Bath had announced that Heathcote's release had been agreed "to allow him to progress his career and international aspirations" aftermore than 50 first-team appearances and scoring close to 400 points.

Edinburgh head coach Alan Solomons told his club website: "Tom joins us with three seasons' experience in the English Premiership, so I expect him to make a valuable contribution straight away.

"His arrival will certainly intensify the competition for places at pivot, while, at just 22, he also fits well with our increasingly promising group of young Scots coming through at the club."

Heathcote won his first Scotland cap as a late replacement in the 2012 defeat to Tonga at Pittodrie.

Two international starts came in the summer of 2013 against Samoa and Italy in South Africa.

Meanwhile, Heathcote and Ruaridh Jackson, who is leaving Glasgow to join London Wasps, have swapped places for Scotland's summer tour.

Jackson joined the squad in Texas on Sunday ahead of this Saturday's Test against USA, with Heathcote now in the pool for later Tests versus Argentina and South Africa.