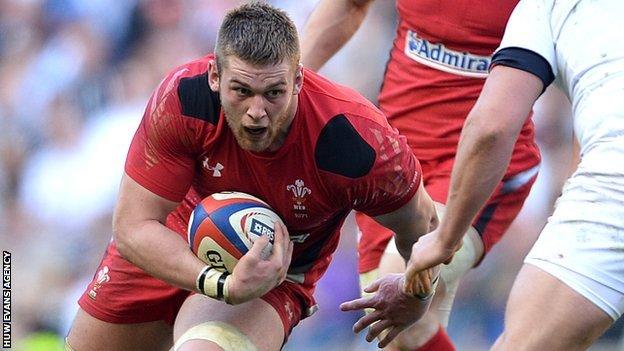 But Edwards says Lydiate is so important that Wales may risk him in the first Test on 14 June even if the Racing Metro player fails to face Eastern Province Kings on 10 June.

Lydiate's hamstring strain kept him out of Friday's trial in Swansea.

With open-sides Sam Warburton and Justin Tipuric injured, British and Irish Lions back-row Lydiate could switch from blind-side to fill the gap at seven.

Versatile Scarlets back-rowers Aaron Shingler and Josh Turnbull have also played at open-side in the past, as has regular Wales number eight Taulupe Faletau.

But 35-cap Lydiate, 26, would appear to be favourite to cover for shoulder injury victims Warburton and Tipuric.

Wales' warm-up match against Eastern Province Kings in Port Elizabeth will be followed by Tests in Durban on 14 June and in Nelspruit a week later.

"I think Dan Lydiate probably needs a bit of a run-out before then [the first Test]," said Edwards. "So whether he's involved in the first game I'm not sure, but we'll decide that later.

"To give him confidence I think it would help him to have a little bit of game time. But Dan Lydiate is the kind of player who's an integral part of our team, maybe we'd even take a chance with him without playing in that game."

"We think they'll all be training later in the week and even Samson Lee is a positive scan," said Edwards.

"We'll re-assess him later in the week, but he seems pretty positive in himself. At first we feared the worst with Samson."