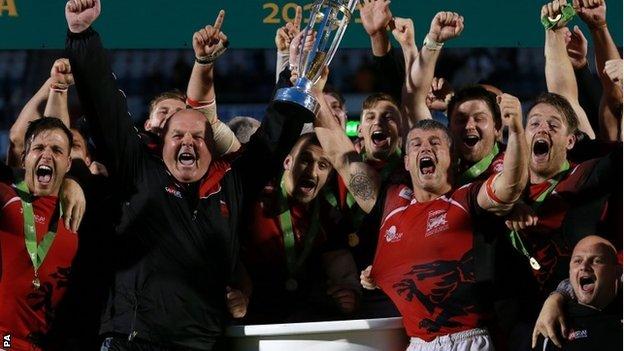 London Welsh secured promotion back to the Premiership with victory in the Championship final against Bristol.

Welsh were 19 points ahead after the first leg last week and came from behind to win on Wednesday night at a sold-out Memorial Stadium.

Bristol had pushed for a comeback, running in three tries from Andy Short, Mitch Eadie and Adam Hughes.

London Welsh and Bristol both won 19 games and lost four each over the regular Championship season but bonus points saw Bristol finish eight clear at the top.

But a late double from Carl Kirwan and Seb Stegmann made sure of an immediate return for Welsh.

It means the Exiles, who finished runners-up in the Championship table, will get a second crack at the Premiership after finishing bottom of the pile in the 2012-13 campaign.

And for a third time in five years, Bristol finished top of the table - this time by eight points - but with no promotion to show for it.

In their last ever game at the Memorial Stadium before moving to Ashton Gate in south Bristol, Andy Robinson's side came with intent to right the wrongs of last week's 27-8 defeat at the Kassam Stadium.

But inaccurate kicking from seasoned fly-half Nicky Robinson, who missed 13 points, coupled with a late surge from their opponents cost Bristol in the final stages.

Bristol had Welsh camped in their own 22 for the opening quarter but failed to get a point on the board, with Robinson missing two consecutive penalties.

And the hosts were punished as Welsh broke forward and Gordon Ross landed a neat drop goal to open the scoring.

Bristol eventually got the try they were pushing for when Short collected a cross-field kick from Robinson and dodged through the defence to touch down.

Bristol in the Championship

Exiles fly-half Ross added three more with the boot before team-mate Chris Cook was sent to the bin for a deliberate knock-on, and Robinson made his first and only successful kick to put Bristol 8-6 up on the night.

Needing 17 second-half points, Bristol did not waste any time in attack and, from an early line-out, Eadie pounced and breezed over the line to leave the score at 13-6.

Welsh's confident kicking continued as Ross landed his second penalty but moments later their usually resilient defence was broken down by Ben Mosses, who fed to Hughes for Bristol's third try, and replacement Adrian Jarvis converted to reduce the aggregate deficit to eight points.

But their hopes of a comeback were ended abruptly when Kirwan nestled over in the corner for Welsh - the try awarded after a lengthy consultation with the television match official - and they followed it up two minutes later with a superb solo try from Stegmann, who raced onto a loose ball on the counter and sprinted home, and Ross converted.

And as the Exiles celebrated their Premiership return, Bristol were forced to look on and plan again for a sixth year in the Championship.

Bristol director of rugby Andy Robinson: "I thought our performance tonight was truly outstanding. It just shows the character of the side.

"Unfortunately, we were chasing too much and we still left a lot of points out there. We didn't take those opportunities, and we have got to look at that for next year.

"It is disappointing for everybody, but that is the nature of the qualification process. We have got to set our sights on our ability to beat Worcester."

London Welsh head coach Justin Burnell: "Bristol are a good side, and I feel a bit for Andy Robinson.

"I don't think they took us for granted, but I think it showed today that you can have one philosophy, but if you don't kick the points it's disappointing.

"But they are a fantastic club, and no doubt they will be pushing for promotion next season, too. However, they will have another big-spending side, in Worcester, to compete against."