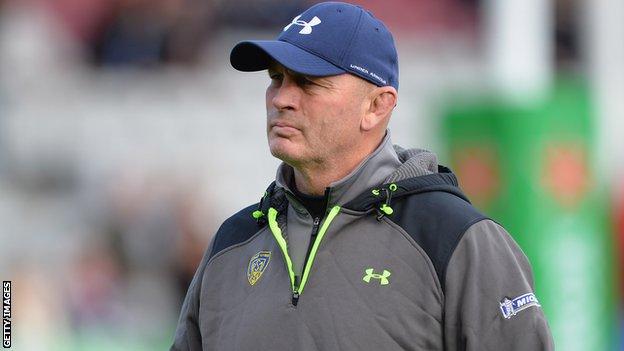 Scotland flanker Johnnie Beattie was left exhausted but excited about the future after a first training session with new head coach Vern Cotter.

The Scots are in Texas preparing for Saturday's Test with the USA.

"Enjoy training, but work hard and win. He provides a great environment and is a really good coach."

Cotter, 52, begins work with Scotland after eight years at Clermont Auvergne, with the New Zealander winning one Top 14 title and finishing a runner-up in the Heineken Cup last year.

He takes over a side ranked 10th in the world after just one win in this season's Six Nations.

"This is the first time we have been together for a long time as a Scotland team," added Beattie.

"It was the first time we have done it all at full pace, there was a lot of running in the heat. Obviously it was tricky but it was good. Now we've got it out of the way.

"We have only had one session but speaking to the guys who know Cotter, he is an intelligent man. He has put Clermont in the position to win games for all those years they have been in the Top 14 contesting finals.

"If we can go anywhere near that with Scotland, with his structures and ideas, that will put us in good stead."

Beattie, who has recovered from a shoulder injury sustained during the Six Nations, is familiar with some of the United States players and thinks they are a far better team than their world ranking of 18 would suggest.

"We know a lot of their key players who are based in Europe, so we know what to expect," he said. "There are some very good rugby players there who are pretty well organised.

"A lot of the boys who play at English and French clubs are talented but not just talented but understand playing within systems and team structures. It will be hard. People think about USA and Canada rugby from 10 years ago but it is a totally different kettle of fish.

"The rankings are there for a reason but these teams don't get their first-string players for a lot of international matches. If they did have them, they would be winning.

"This is a shot for us to play the first-string side; and it is not a USA ranked 18 that we are facing. It is different, a lot tougher than the gap the rankings points would suggest."