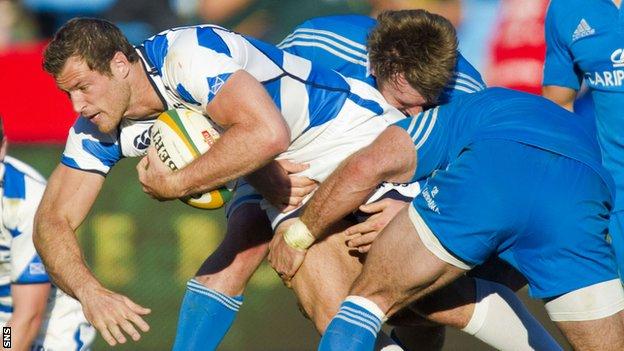 Scotland wing Tim Visser is hoping to make up for lost time on the tour of North America.

The Edinburgh player, 27, wants to prove to Vern Cotter he should be part of the new Scotland head coach's plans for next year's World Cup.

Visser missed much of the season with a broken ankle but returned for the final few matches and earned a place in Cotter's first squad.

"For me it's a fresh start right now," Visser told BBC Scotland.

"My big goal for the end of the season was to try to play myself onto this tour.

"If I hadn't have done that then most of the season would've been a waste. I'm delighted to have made it, I'm very honoured to have another chance to represent Scotland.

"With the increased competition on the wing and the World Cup looming, this is a good time for me to try and impress again."

Dutch-born Visser says Cotter has been stressing the need to "do the simple things better" while also focussing on "high-intensity" play in his first few days with the squad.

"It's been good to finally meet him, I know some of the other players met him earlier on last year.

"He probably has had a chance to look at the other players, especially at international level."

Visser admits acclimatising to the Houston heat ahead of Saturday's Test against USA has been a challenge but believes the Scots will not change their style of play, with Canada next up for the Scots.

"It is very hot and the humidity is really quite high so we're struggling with that a little bit right now," added the former Newcastle Falcons player.

"We're acclimatising slowly but surely. By the time we get to game time, we should hopefully have a better grip on things.

"At the same time, it's a level playing field for them. Most of their players play in Europe. To play here in the middle of the desert, it'll be just as hard for them as it is for us.

"We're all about trying to play short periods with high intensity, trying to keep hold of the ball and break defences down.

"You can't change that just for the climate you play in. We've proven that we can do that anywhere in the world.

"We've done that in Australia, Fiji and Samoa so Texas will just have to be added to that list."