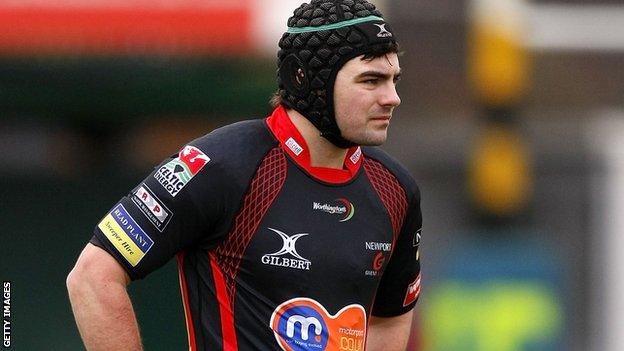 The 24-year-old Welshman as they attempted to gain promotion to the Premiership.

But following Bristol's Exeter have given Hughes the chance to play in England's top flight.

"It's a great move for me," said Hughes, who can also play at full-back and centre.

"Everybody watches the Premiership and the quality across the board is right up there, so I think it will definitely be good to test myself in that environment.

"Being at Bristol for these last few months has set me up nicely, but now I can't wait to get stuck into pre-season and going from there."

A former Wales youth international, Hughes played 80 games for the Dragons after making his debut in 2010.

At Bristol, he scored three tries in nine matches, but only made Andy Robinson's starting XV in three occasions and was on the bench for Wednesday's second leg against London Welsh, which they lost 21-20 to complete a 48-28 aggregate defeat.

Exeter head coach Rob Baxter said Hughes was a player the club had been watching for quite some time:

"We had a look at him about three years ago just before he re-signed with the Dragons. He was player of the year that year so we looked to sign him and have kept tabs on him ever since," he added.

"We're really pleased to bring him to the club because I think he's got a lot of qualities that we can help him show again and develop and he's one of those guys who has the physical potential to be very good and just needs to get some decent rugby under his belt and kick-start his career."