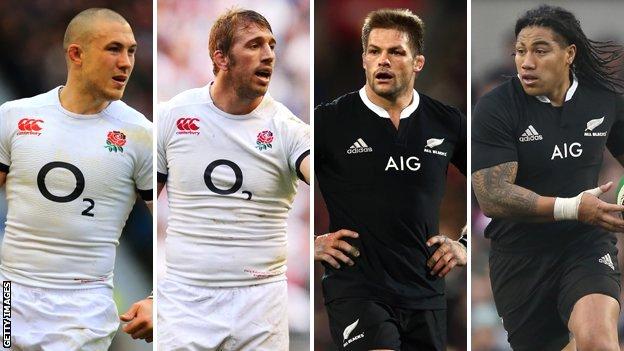 It's been a long, hard season, you're without half your team for the first Test and you're playing the world champions at a stadium where they haven't lost for 20 years.

All I can say is, what an opportunity. The England players can go out there, show what they're capable of and shake up the established order.

New Zealand have lost only one of their past 35 Test matches but that was against England, when Stuart Lancaster's men secured a record 38-21 win at Twickenham in 2012.

And although the All Blacks have not lost at Eden Park for two decades (when England squad member Anthony Watson was all of four months old), we all know that record has to finish some time.

Although maybe not on Saturday...

Sack the scheduler or suck it up?

The scheduling means England will be without a string of players from Premiership finalists Northampton or Saracens in the first Test, but I don't think we should dwell on it - we've known it for a long time after all.

The media will make something of it but England can't bring it up because New Zealand will just call them whingeing Poms - and the visitors will be thinking of it as an opportunity.

You don't have to look at the stats to know New Zealand's confidence will be high - they are world champions after all - but they make impressive reading nonetheless.

They feel their most comfortable at Eden Park, but we all know they have to lose their unbeaten record at some stage and I'm looking forward to it.

New Zealand are favourites for the World Cup but if England could get one win in the three Tests on this tour, everyone will say they're really in with a shout, and not just because they are hosts.

New Zealand has not always been the happiest of places for England to visit, with the 2011 World Cup debacle following on the heels of the unhappy 2008 tour.

However, England coach Stuart Lancaster has built a squad with the culture and attitude that he wanted, and they now have the character to represent England and come across the right way.

New Zealanders will have watched them in the Six Nations and thought that could possibly be the moment England changed into a side which could worry any nation - even the All Blacks.

They're one apiece over the past two matches after England won comprehensively in 2012 and then pushed the unbeaten All Blacks of 2013 close.

The difference is that both of those matches were at home, of course.

Will it be Burns' night?

Despite England being under-strength for the first match, they still have half of their Six Nations starting XV available.

Freddie Burns kicked two penalties on his England debut against New Zealand, a 38-21 win in December 2012

Fly-half Freddie Burns came on for the last part of the win over the All Blacks in 2012, so at least he knows what it's like to play and win against them.

His mind has not been right this season because he was coming to the end of his time at Gloucester, but now he's signed for Leicester and he's back in the squad. Good players take their opportunities.

A lot of questions are going to be answered on this tour and a major one is who is the best back-up to fly-half Owen Farrell, or can even challenge him for the Test shirt?

Anyone who's got any gumption will want to make selection hard to Lancaster.

Burns in form and kicking at 80% is a real threat - he's got to find a way to rediscover that form, and there's no better place to find it.

Another player with a chance to make a statement is Bath inside centre Kyle Eastmond.

Selection is subjective and although he's behind 20-year-old Ollie Devoto for Bath at the moment, the former rugby league player is one of the most gifted 12s playing rugby anywhere.

He has superb footwork, excellent acceleration, good skills and his handling ability is second to none.

He might not smash people backwards but he can also tackle.

His opposite number for the All Blacks, Ma'a Nonu, might have a significant advantage in size (he is 6ft and 16st 10lb to Eastmond's 5ft 7in and 12st 8lb) but statistically he does not have the best defensive record, so I hope it's an area England have looked at and are thinking of attacking.

Eastmond, who played well in Argentina below the radar last summer, is essentially still unknown at international level but he's difficult to stop, with a low centre of gravity - you've almost got to engulf him.

Eastmond and Burns are both good runners and All Blacks fly-half Aaron Cruden is not the best of defenders, so there might be an opportunity there.

If the midfield duo can give Manu Tuilagi the right ball, he can cause all sorts of problems and New Zealand know the Leicester centre is a threat after what he's done against them in the past.

England need to try and be positive, play the game they know they can play, and if they have a tackle success rate of 90% or above they will be in the game right to the end.

One key area will be how England kick from hand. Nearly a third of the All Blacks' tries come from kicks and that's not all down to their attacking threat - clearly the opposition's kick chase wasn't good enough.

England will have to be precise with their kicking and put the New Zealand back three under extreme pressure.

New Zealand are missing men too

It's not just England who will be below strength as New Zealand will be without all-time leading Test points scorer Dan Carter, who is still on a sabbatical from the All Blacks.

They will also be without World Player of the Year Kieran Read, and the number eight is a real loss because he is as good in attack as defence.

His replacement Jerome Kaino, back in black after two years playing in Japan, is a good carrier but he is not as expressive as Read with ball in hand, which means the All Blacks' counter-attack will not be as fluent as it would have been with Read.

Add in the absence of the classy Julian Savea on the wing and that's three top-quality players missing for the hosts.

England will have concerns, but not as many as some have suggested.

Props David Wilson and Joe Marler are solid Test players and Rob Webber has recovered from injury to start at hooker - he's third choice but at least he's been capped before.

In the second row England have the world class Joe Launchbury, while Geoff Parling is a top-notch line-out technician.

Alongside captain Chris Robshaw in the back row, number eight Ben Morgan started the last two Six Nations games, while James Haskell is the most experienced player available for the first Test with 50 caps.

In the backs, it is a blow scrum-half Danny Care is ruled out by his shoulder injury because he has been on fire, although Ben Youngs is a good player and has been showing signs of form towards the back end of the season.

Mike Brown has been brilliant at full-back this season, while on the wings Jonny May is an elusive runner and Marland Yarde will want to show he's world class.

Eastmond and Burns both have points to prove in the midfield and, when you chuck in the power of Tuilagi, there's enough of an attacking threat to worry any side.

England have to carry on in the same vein as in the Six Nations, when they defended well and their attack got better and more inventive as the tournament went on.

If they continue to improve then who knows what could happen over the next few weeks, although they will need to score two or three tries (if conditions are good) if they are to win Tests.

What should we look out for?

I expect the scrum and line-outs to be pretty even and the key area could well be at the breakdown, where I expect New Zealand to have an advantage.

England open-side Robshaw is not really a turnover specialist and although lock Launchbury is good in that area, Robshaw has got to get in there and really compete for turnovers.

Once they've forced a turnover you're unlikely to see All Blacks forwards then carry into contact - they will look up and pass and that is a sign of the rugby intelligence that is spread throughout their whole team.

The handling ability and decision-making of their forwards is as good as any world class three-quarter.

So who's going to win then? If England's tackle success is 90% or above, New Zealand will win by a score. But the more tackles England miss, the more they will lose by.