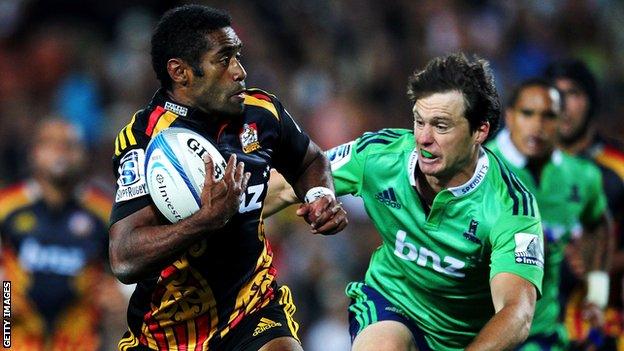 The 27-year-old back will join Quins in August once he has fulfilled his commitments with Super Rugby side Waikato Chiefs.

"Asaeli is one of the most exciting backs in world rugby," Quins director of rugby Conor O'Shea said.

"He comes from a winning culture at the Chiefs, is equally at home on the wing or at centre."

After some amazing years at the Chiefs, I am excited to be heading to Harlequins next season

He added: "I am sure he will fit seamlessly into the way we play here and add to the quality we already have."

Tikoirotuma started his professional career in New Zealand playing with Wanganui in the Heartland Championship for five years, before making the move to ITM Cup club Manawatu in 2010.

He worked with current Waikato Chiefs coach Dave Rennie at Manawatu and Tikoirotuma joined the Chiefs in 2012.

Tikoirotuma has made 33 appearances for the Chiefs, scoring 11 tries, and has won two Super Rugby titles with the club. He made his international debut in November last year and has played a total of three matches for Fiji.

"After considering my next rugby move after some amazing years at the Chiefs, I am excited to be heading to Harlequins next season," Tikoirotuma said.

"I was impressed with the club's facilities, the coaching staff and importantly the style of rugby they play."