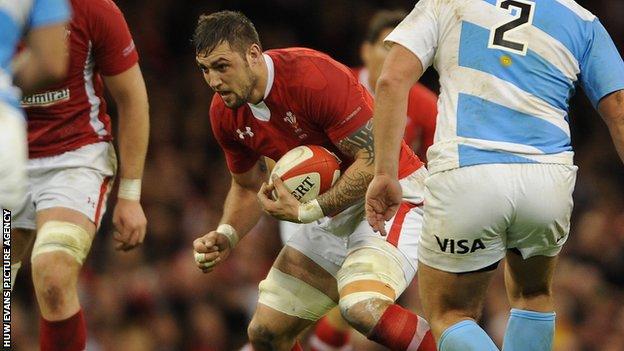 Wales flanker Josh Turnbull wants to prove that he merits a place at the 2015 Rugby World Cup by playing against South Africa.

Turnbull has not featured for Wales since 2012 and has since suffered a shoulder injury that disrupted his progress.

"Fingers crossed I'll get a chance to play out there and show what I can do," said 26-year-old Turnbull.

"There's going to be a long 12 months now before that World Cup."

The last of Turnbull's five Wales appearances came in the 12-26 defeat by Argentina in 2012.

The Scarlets flanker, who will move to Cardiff Blues after the tour ends, told BBC Wales Sport that he was looking forward to "just getting an opportunity" in South Africa, where Wales play three games.

He added: "Players want to put their hands up, grab these opportunities and show what you can do by putting your best foot forward for selection. It starts now."

Wales face Eastern Province Kings on 10 June, and take on the Springboks on the successive Saturdays that follow.

"It's been a long 18 months with injury," said Turnbull. "It's nice to get back in the squad, to be back and involved in some form.

"Training sessions start now and you want to impress the coaches so you can get that starting jersey, or at least be involved in some way come game time."

With back-rows Justin Tipuric and Sam Warburton both missing from the squad due to injury and Dan Lydiate doubtful, Turnbull may be handed a rare opportunity to start.

But the 26-year-old praised his competition for the role ahead of the warm-up match against the Kings, who are coached by former New Zealand fly-half Carlos Spencer.

"It's going to be competitive between three of us getting those jerseys," said Turnbull.

"There's three of us that are all regular blindside flankers - me, Dan [Lydiate] and Aaron Shingler.

"And obviously Toby [Faletau] and Dan Baker as well, so there's good competition in that back-row.

"We've got to show the reason why we've been picked and go out there and perform."