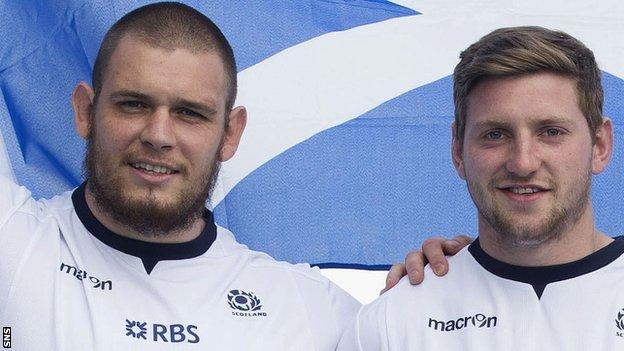 Stuart Hogg starts at full-back despite losing his place at Glasgow towards the end of the season.

The Warriors' Alex Allan and Edinburgh's Grayson Hart are other potential debutants from the bench.

Reid and Russell featured in Glasgow's 34-12 Pro12 final defeat by Leinster on Saturday.

New Zealand-born Cowan, who qualifies for Scotland through his mother, was called into the national squad for last year's autumn internationals without winning a cap.

He has spent a season with London Irish after switching from English Premiership rivals Worcester Warriors.

Cotter has taken over from Scott Johnson as Scotland coach after leaving Clermont Auvergne and Sunday's meeting with the Eagles is the first of four matches on tour this summer.

"There's a lot of excitement within the team leading into this Test," said Cotter of the meeting with USA.

"There are players who are going to earn their first cap for Scotland, and there are those who see this as a chance to stake a claim for the Rugby World Cup squad in 2015, as there are only a certain number of opportunities remaining for players to express and prove themselves.

"We need to look at our options in decision making and game-controlling and Finn has been playing very well of late for Glasgow Warriors, and this is a good chance for him.

"I like what he offers. He seems a composed young lad for a 21-year-old, who controls games and will obviously grow in this position as he develops.

"Gordon has also impressed with Glasgow. He offers size and mobility and it'll be interesting to see what he brings to the forward engagement, outside of the set piece.

"I want to see somebody who's aggressive, who cleans out, who carries and shifts bodies, so this is Gordon's opportunity to show us what he can do in those areas of the game.

It's a matter of communicating, staying calm and focused on our game, and the game we want to develop

"Finally, injuries to Ross Rennie and John Barclay give Blair a chance to compete for the back-row jersey. He's an out and out number seven, he's quick on his feet, can carry, and is quick over the ball.

"We're looking for a genuine seven who gives us options, so I'm looking forward to seeing what he can do on the paddock after playing well for Scotland A earlier this year."

Cowan is joined in the back row by experienced flanker Alasdair Strokosch and number 8 Johnnie Beattie while Scott Lawson, Geoff Cross, Richie Gray and Jim Hamilton make up the rest of the pack with Reid.

Greig Laidlaw captains the side at scrum-half with Sean Maitland on the opposite wing to Visser and Sean Lamont and Duncan Taylor at centre.

"I think it's important that we have a very physical approach to the game," added Cotter.

"We're in for a tough Test because they come out quickly in defence to try and stress you, so we'll have to keep composure under that kind of pressure.

"If they come out of the line I want the players looking up and seeing what's in front of us.

"We're on a dry track and we want to put speed into our game. We want to be able to play, and play across the park, as well as be intelligent with the way we use the ball.

"It's a matter of communicating, staying calm and focused on our game, and the game we want to develop."