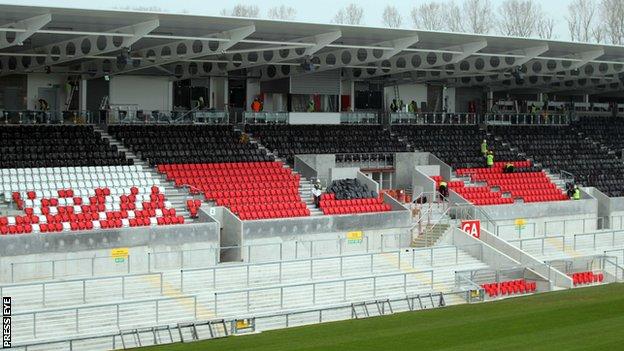 Ulster Rugby has announced that their Ravenhill ground will be called Kingspan Stadium from now on following the signing of a 10-year agreement with the Cavan-based insulation company.

An Ulster statement said the agreement would "result in significant investment for the game of rugby at all levels".

The global company has been a sponsor of Ulster Rugby since 1999.

The agreement is understood to be a multi-million pound deal although the precise figures have not been released.

Many other major sports stadiums throughout the world have gone through similar naming rights processes in recent years and Ulster argue that financial imperatives leave them with no option but to follow the same path.

"It's critical we get good quality investment into the stadium that we can reinvest in all of the game," said Ulster Rugby's chief executive Shane Logan.

When pressed on the sum of money involved, the Ulster chief said it was "substantial" and that the deal was "right up there at the top end" when compared with naming rights deals agreed by other top European rugby clubs in recent years.

Logan acknowledged that Ulster's decision may not go down well with traditionalists but indicated his confidence that the vast majority of supporters will be won over.

"I don't think we expect everybody to immediately get used to the name but as the with Aviva, the Etihad and other leading stadia, it does happen through time.

"We look upon it a bit like a marriage. When my daughter gets married, her name will change. It's perhaps a little bit similar. It's progress," added the Ulster chief executive.