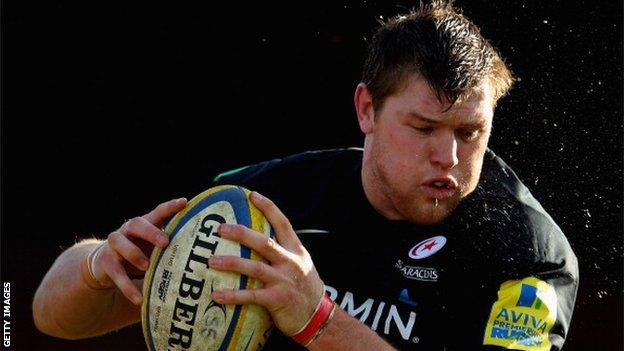 Saracens forward Hayden Smith has been restored to the USA side to face Scotland, while Seattle fly-half Shalom Siniula will be handed his first start.

Siniula is rewarded for a try in the second leg after earning his first two caps in the World Cup qualifying victory over Uruguay.

Seattle lock Louis Stanfill was preferred to Smith for the second leg.

But Smith returns alongside Stanfill in a XV that includes six players who ply their trade in England.

The Eagles are, however, minus Northampton forward Samu Manoa through injury for the match in Houston.

Head coach Mike Tolkin thought that 29-year-old Smith had shown improvement after a stint in the National Football League with New York Jets.

"Hayden's looking tighter, he's gotten rid of the extra bulk," said the coach. "He's made progress from March and has a road to go, but he's put himself in a position to play."

Tolkin thought was looking for Siniula to control the game against the Scots, who will also be group opponents in next year's Rugby World Cup finals.

"We're looking for Shalom to do what we want out of our 10s: run the show, be an organizer, be a leader," said the coach.

"He has athleticism, a nice step, he can shoot holes and take advantage of that.

"And he has a little bit of flair to his game, which we like. He's a real skilful player."

Half of the USA squad are home based, but Tolkin added that he thought that the depth of his squad had increased to such an extent that he was now confident about bringing players off the replacements' bench.