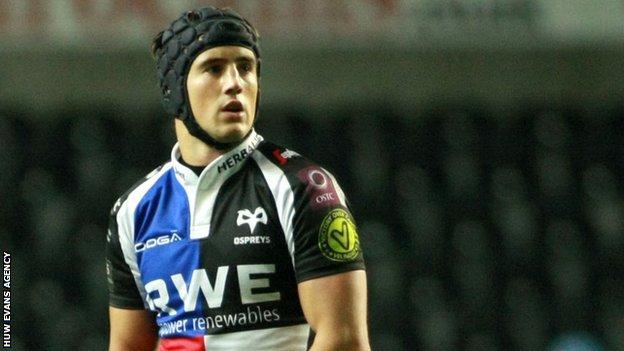 James Hook is named at fly-half, while centre Steven Shingler and wing Jordan Williams - both Scarlets - will make their debuts in Port Elizabeth.

The game is a warm-up match ahead of Tests against South Africa on successive Saturdays.

Racing Metro's Lydiate says leading Wales for the first time will be a "massive honour".

Gatland chose the former Newport Gwent Dragon to lead the 2013 British and Irish Lions to a 35-0 win over Melbourne Rebels and said Lydiate's "passion" was a factor in asking him to lead Wales on Tuesday.

Lydiate admits he needs game time because of his injury and hopes his team-mates can impress Gatland ahead of the Tests.

"If you put your hand up and perform really well, hopefully the coaches will look at you and you'll be in with a shout for the Test side and that's why everyone's out here - they want to play against South Africa," said Lydiate.

Versatile Scarlets back-rower Josh Turnbull comes in at open-side in the absences of regular Wales captain Sam Warburton and his rival Justin Tipuric, both of whom have shoulder injuries.

"It's an opportunity to see a number of the squad pull on the Wales jersey and see how they handle the game and the pressure," said coach Gatland.

"We know how tough the next few weeks are going to be and that starts on Tuesday and we have to be prepared for a big game and hit the ground running.

"We were keen to have this match, to experience a short turn around and replicate what we will face at the World Cup next year."

Reading-born Morgan, 22, who is to join English Championship club Bristol for next season, impressed Gatland as a late Possibles replacement against Probables on Friday, 30 May.

He has played most of his rugby at fly-half, but came on at full-back in the trial at Liberty Stadium and starts in that role at Nelson Mandela Bay Stadium.

Gloucester recruit Hook has won 75 Wales caps, but last started in his favoured fly-half spot against Tonga in November, 2013.

He is partnered at half-back by Scarlets scrum-half Rhodri Williams with his uncapped regional rival Gareth Davies on the bench.

Rees underwent successful treatment for testicular cancer during the season.

He took a break from leading and playing for Cardiff Blues after his diagnosis in October, 2013 and made the Wales tour party after impressing following his return in March.

But Northampton wing George North and Perpignan lock Luke Charteris are on the bench.