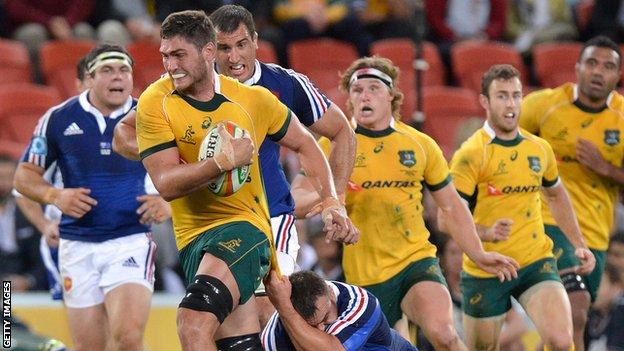 Australia overcame the first-minute loss of captain Stephen Moore to a knee injury as they ran in seven tries against France in the first Test.

"It's a great start for us, the boys scored some great tries," said Moore.

"Unfortunately I wasn't out there for much of it," added the 31-year-old hooker, but who now faces a scan to determine whether he can play again in the series.

The two next two Tests are being staged in Melbourne on 14 June and Sydney on 21 June.

Fly-half Bernard Foley converted six of the seven tries and also landed a penalty for Australia, who have not lost to France at home in 24 years.

The Wallabies had already secured a 50-9 lead when Parra finally crossed for the visitors.

Frederic Michalak, who kicked an early drop-goal and two penalties for France, converted that score and the penalty try.