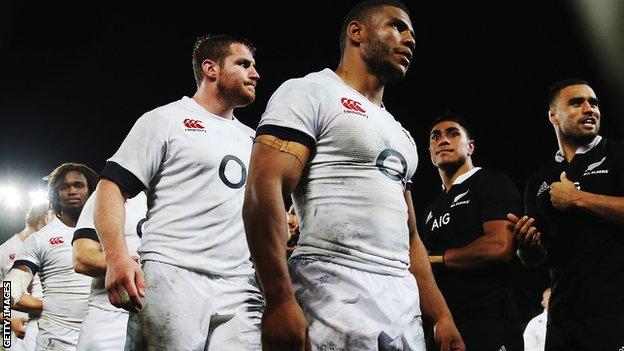 England head coach Stuart Lancaster said he was "frustrated and proud in equal measure" after Conrad Smith's last-gasp try gave New Zealand a 20-15 victory in the first test in Auckland.

"It's really disappointing. To come to Eden Park and lose at the end is heart-breaking," said Lancaster.

"I thought a draw would have been a fair result. It was a fantastic effort and it's a shame we couldn't nail it."

"But it's a three-game series," he added. "We're disappointed today but we'll come back with all guns blazing."

A combination of injuries and scheduling, which meant England could not pick players from either Northampton and Saracens - who met in the Premiership final last Saturday - meant Lancaster's men were significantly below strength.

They had a fourth-choice fly-half in Freddie Burns and were missing eight of the XV which started their previous match, but England pushed the world champions all the way and Lancaster is looking forward to the next two Tests.

Leicester-bound Burns, who kicked four penalties on his return to the side, said: "Give the All Blacks credit - give them an opportunity and they generally take it.

"But we're massively disappointed. Our set-piece went well, especially the scrum. We could have won."

All Blacks captain Richie McCaw was relieved his team had picked up their performance in the second half.

"England were just a bit quicker in the first half," he said. "I thought after half-time we got back in the game and put the pressure on.

"It was never going to be easy but we got there in the end - and getting there is what counts."