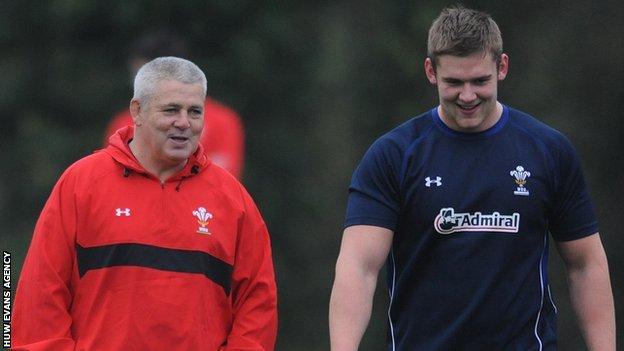 Wales coach Warren Gatland says Dan Lydiate's place in the squad for the first Test against South Africa may be at risk.

The British and Irish Lion is captain for Wales' warm-up match against Eastern Province Kings on Tuesday.

But Gatland says it is a "big game" for the flanker, who has recovered from a hamstring injury.

"He needs to show us that he's ready and up to Test match pace," said Gatland.

With open-sides Sam Warburton and Justin Tipuric ruled out by shoulder injuries, Lydiate could switch from blind-side to fill the gap at seven for the opening Test.

Versatile Scarlets back-rowers Aaron Shingler and Josh Turnbull have also played at open-side in the past, as has regular Wales number eight Taulupe Faletau.

But Gatland says Lydiate, who has won 35 caps, is not guaranteed a place in the squad for the opening clash against the Springboks in Durban on 14 June.

"I just want to see him [Lydiate] come through the game," said Gatland.

"I think the important thing is we know with Dan, he needs rugby and he gets better with games and hopefully he's up to speed.

"If he's a bit short there's a possibility that he might be on the bench or he could miss out so it's a big game for him on Tuesday."

Scarlets centre Steven Shingler and wing Jordan Williams will make their debuts for Wales in Port Elizabeth as well as Ospreys fly-half Matthew Morgan, who will play at full-back.

Morgan, 22, who is to join English Championship club Bristol for next season, impressed Gatland in the Welsh trial match as a late Possibles replacement against Probables on Friday, 30 May.

"I think with Matthew [Morgan] he did pretty well when he played and came on last week," said Gatland.

"We know he can play at 10. We know it's an option for us, but we potentially see him just getting a little bit more time and space at 15 as well and he has the ability to play both positions.

"So we want him to have a bit more time on the ball and hopefully we see some of that counter attacking sparkle that he produced last Friday."

As for the tour itself Gatland says his side are aiming to win the two Test series against the Springboks.

"We need to start well and get some confidence and hopefully we can win," said Gatland.

"A couple of years ago in Australia we were very unlucky, we were close to South Africa in the autumn and we are not here to make up the numbers.

"We are here to build, get some confidence and hopefully to win the series."