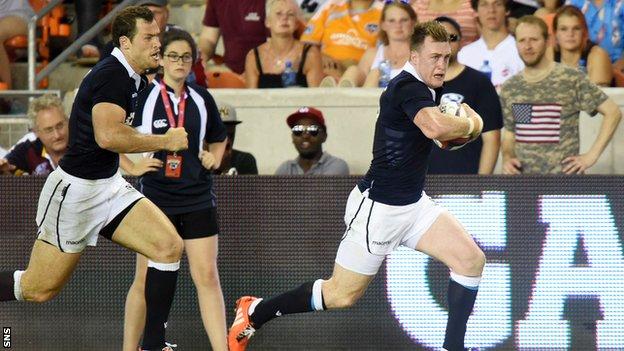 Vern Cotter enjoyed victory over USA in his first match in charge of Scotland in Houston.

Tim Visser and Stuart Hogg crossed and the Scots also scored a penalty try at the BBVA Compass Stadium.

Captain Greig Laidlaw kicked the rest of Scotland's points in scorching temperatures, with Chris Wyles knocking over two penalties for the Eagles.

Victory in Texas would have been more comfortable for Scotland had their handling been more assured and New Zealander Cotter admitted afterwards his new charges would have to improve against the Canadians.

However, the Scots were dominant at the set piece.

Gloucester's Laidlaw landed an early penalty after the Scottish forwards had bossed the USA scrum but Saracens' Wyles soon levelled.

The guile of Hogg and Sean Maitland began to cause the Americans problems and, when Laidlaw spotted a gap behind a ruck, Visser made an easy run in for the opening try.

The score marked the Edinburgh player's return to international action following a broken leg and took his tally to seven in 13 caps. Laidlaw converted.

And there should have been more with Visser spilling an easy chance following good work by Hogg and Duncan Taylor and the Dutch-born winger also dropped the ball when going for a try.

Wyles then cleared to touch after a Visser's pass fell short of scrum-half Laidlaw.

Scotland mauled and scrummed on the home line for almost five minutes before getting USA prop Olive Kilifi sin-binned for dropping one scrum too many.

And when the USA did the same again, Scotland eventually got their reward with a penalty try that Laidlaw converted.

Despite being a man short, the home side thought they had a try of their own when captain Todd Clever powered his way to the line only to be penalised for a double movement.

The heat began to take its toll in a second half lacking in fluency and the Americans briefly cut into Scotland's lead with a second Wyles penalty.

But Hogg lit up the Test with the clinching try, superbly catching a high ball under pressure and running in from 50 yards.

With Jim Hamilton being replaced by Grant Gilchrist in the first half, the lock could be a doubt for Saturday's meeting with the Canadians.

Tests against Argentina and South Africa follow for Cotter's side, with a different squad selected for the second half of the tour.