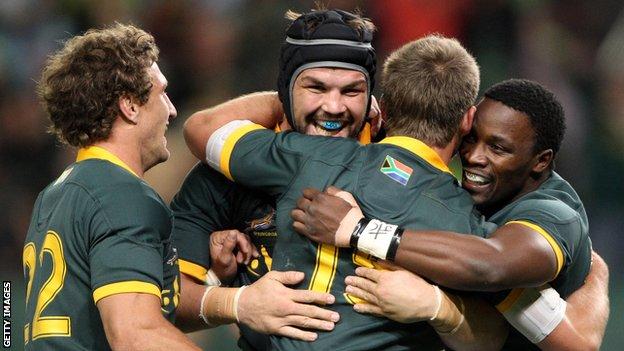 South Africa coach Heyneke Meyer has warned his players they will face a "well-prepared" Wales side in next Saturday's first Test in Durban.

The Springboks warmed up for the clash with Warren Gatland's side with a 47-13 win over a star-studded World XV, scoring six tries.

But Meyer warned his team that Wales will pose a tougher challenge.

"They are a quality side with big backs which will give them go forward ball," said Meyer.

Warren Gatland's side play a warm-up against Eastern Province Kings on Tuesday in Port Elizabeth before facing the Springboks on 14 and 21 June.

The first of those Tests takes place in Durban and the second in Nelspruit.

South Africa then host Scotland on 28 June in Port Elizabeth.

Wales have never beaten South Africa away from home but Meyer is taking nothing for granted and expects a tough match.

"Wales will be well prepared," said Meyer. "They also played together in the Six Nations, while we are just starting out."

Lock Alistair Hargreaves scored an early try for the World XV, but scores by Bryan Habana and Toulon club-mate Bakkies Botha helped South Africa to an 18-13 lead at half-time.

After the break hooker Bismark du Plessis crossed twice, along with Johan Goosen and Willie le Roux, while Morne Steyn and Goosen kicked a total of 15 points.

It was the first match South Africa have played since their 19-10 win in Paris against France on 23 November, 2013.

Meyer feels his side will be much better prepared with another week of training.

"This match was important to us, because we have to play together as a team to become better," said Meyer.

"I believe we are a very dangerous team when we play with quick ball and that was something that I was unhappy about at the break.

"I had some harsh words for the players about the penalties conceded in the first half. In the second half we applied ourselves better at the breakdown and we scored some very good tries.

"To score six, seven tries against a side with the quality of this World XV is very pleasing. There are no injuries, and that is great news for us."