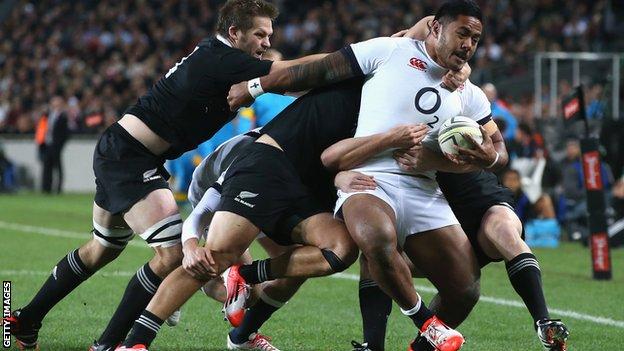 England are considering moving Manu Tuilagi to the wing for the second Test against New Zealand in Dunedin next Saturday.

With Billy Twelvetrees fit and Luther Burrell available again, coach Stuart Lancaster has his three first-choice centres to choose from.

Lancaster says he may move Tuilagli, 23, out wide to accommodate all three.

"We've got a potential option of playing Manu on the wing. That has been talked about in selection," he said.

"We have not done that yet, but it's certainly something that could happen. Manu would definitely be a handful on the wing.

"He has certainly got pace - he's one of the quickest in our squad and can track back.

"He would be a significant threat off phase play and defensively he would be fine, he understands the system."

Lancaster is planning to make a number of changes to the team that narrowly lost 20-15 in the first Test, with Danny Care and Twelvetrees expected to return from injury.

However, hooker Luke Cowan-Dickie is returning to England for further assessment on a knee injury.

"There will be more changes than you ordinarily make," Lancaster told BBC Radio 5 live's Sportsweek programme.

"There were some pretty good players sat in the stand watching that game."

Injuries and players missing from Northampton and Saracens - who met in the Premiership final last Saturday - meant Lancaster was limited in his selection.

Harlequins scrum-half Care missed the first of the three Tests with a shoulder injury, while Gloucester inside centre Twelvetrees has an ankle problem.

"I've got to get the balance right. That's going to be the key thing because the priority has to be to win the second Test. If we win that then we have got a series that we can win.

"It is a must-win game and that will be the overriding decision that will influence where I go on selection."

Although eight of the XV which started England's previous match were missing, only a late New Zealand try consigned them to defeat.

"We don't want to get carried away as we didn't win the game, we lost," added Lancaster. "We have to make sure we rectify that next week.

"But, overall, to see players put under pressure and see Freddie Burns, Kyle Eastmond, Rob Webber and these guys that have waited patiently for opportunities, it is rewarding.

"It is a really positive sign for the long-term future of England."