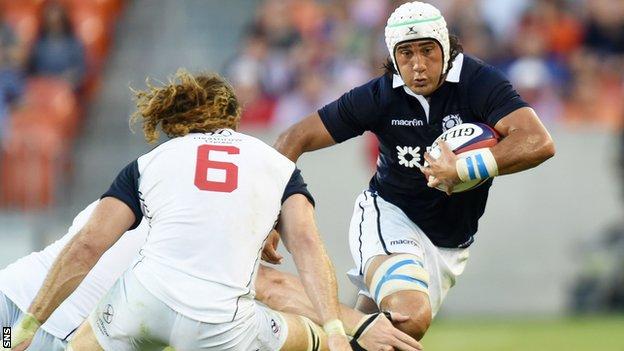 Vern Cotter declared himself satisfied with Scotland's performance and win in his first match in charge against USA.

The Scots won 24-6 in scorching Houston temperatures, though Cotter admitted improvements would be required for their meeting with Canada on Saturday.

Tries from Tim Visser and Stuart Hogg were the highlight for Cotter, who felt Scotland should have scored more.

"The primary satisfaction is that we scored tries and we didn't concede a try," said Cotter.

"That's a good start because the States didn't give up. They threw everything at us and made ground. They're good ball carriers, they're a good team.

"Obviously I'm happy because we got the win. I thought the players, despite the difficult conditions, played well.

"With certain things, as all coaches will say, we have to do better next week and we're working on those.

"Our intention was to get over the line, score points and that's very good."

"The guys that came in, I thought they all played well," enthused Cotter.

"Gordon Reid at the first ruck took the ball and ran through the middle of it. Obviously he wants to be part of the game and that's really important.

"Blair Cowan had an outstanding game at openside, he kept pressure on the whole time. Their play-makers never really had an easy time.

"Finn Russell, you'd think he's played 20 or 30 games already. He was composed, he kicked well out of his hand. He directed play well and defended."

Looking ahead to Saturday's Test in Canada, Cotter expects "a step up" in opposition.

"They [Canada] have probably got a little bit more variety in their game," he explained. "Canada beat the States a couple of times last year.

"We've got injuries, we need to assess those and then we'll be making decisions on whether those players need to be replaced.

"The basis of today's team will play again next week but we may need players coming out of Scotland to help us."

And Captain Greig Laidlaw, who kicked nine points to add to scores from Tim Visser and Stuart Hogg and a penalty try, insists Scotland cannot rest on their laurels.

"I was just pleased with how the team played," he said of the match in Houston.

"We maybe should've scored another try.

"It's only one win against and we want to go to Canada and build the tour from there."