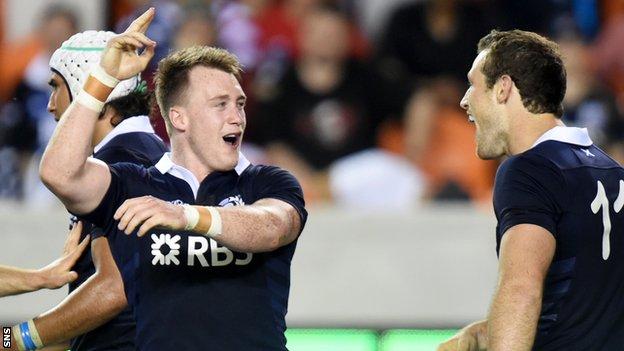 Scotland full-back Stuart Hogg has pledged his future to Glasgow Warriors following uncertainty about his position at the Pro12 club.

The 21-year-old was given a starting berth despite having lost his place at Glasgow to compatriot Peter Murchie.

"I'm happy at Glasgow, it's a club going in the right direction," said Hogg.

The full-back repaid Cotter with a glimpse of the ability that won him a place on the British & Irish Lions' tour last year.

But he acknowledged that he had to get his overall game back to that level, while ending speculation he would be leaving Glasgow this summer.

Hogg was dropped by Glasgow for their Pro12 play-off semi-final win over Munster and the defeat by Leinster in the final.

Head coach Gregor Townsend insisted that it had nothing to do with reports that the player held talks with other clubs about a possible move away from Scotstoun.

"We've been in two semi-finals and a final in the last three years," said Hogg. "So, it's a club going in the right direction. Hopefully next year we can get that win.

"A lot of the pressure's been put on me for not performing but, at the end of the day, Peter Murchie has been playing out of his skin.

"He's taken his chances when they've been on offer. Credit where credit's due, he's been spot on in his play and I can't grumble being stuck behind him.

"To get out here [the USA] and get a game: it's just great being back out on the pitch and expressing myself. To be part of a winning team in those conditions was ideal."

Hogg has a year left to run of his contract with Glasgow, who he joined in 2010.