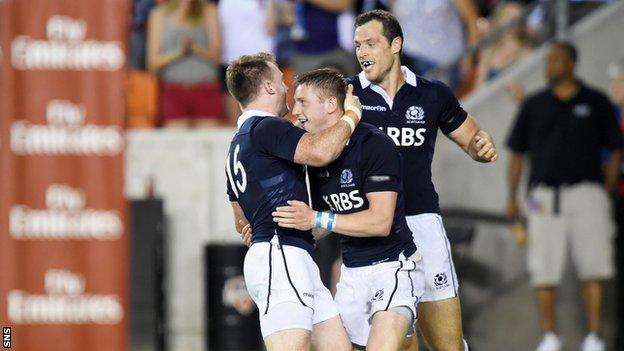 Before assessing Scotland's performance in the 24-6 victory over the United States, it's worth looking at the contributing factors to a tough fixture.

At kick-off, the temperature, according to the pitch-side meteorologist (you've got to love the American commentary), was 95 degrees.

I can't sunbathe in that heat, let alone run around in it. It's not just the heat; the knock-on effect is sweat that, trust me, makes the ball wetter than a dolphin's duvet. I'd rather play in rain.

That, matched with the rustiness of no game for a minimum of three weeks for a lot of the players, adds to a really stressful playing environment.

As a consequence, Scotland probably reached pass marks - but Vern Cotter will be seeking plenty of improvement against Canada next week.

Cotter placed huge emphasis on the basics, and doing the simple things well. When Scotland put phases together, they looked organised and had rhythm. But on the whole, the game was such a stop-start affair, mainly due to continual scrummaging issues (not helped by the referee) and handling errors on both sides, that cohesion was rare.

Canada will provide a sterner test next week but with this game under the belt a more complete performance should be expected, and indeed demanded, by Vern Cotter

Against lower-ranked teams, the key is building pressure through possession, going through the phases, manipulating the defence and waiting for opportunities. They will come, and when they come you've got to be clinical.

I'm sure this would have been the message pre-game, but it didn't go entirely to plan as too many opportunities were missed. However, at least the chances were there in the first half.

The second half of the game was poor on so many levels and deteriorated as a spectacle.

All 30 players were struggling with the heat but I thought it was brilliant that, rather than kicking the ball dead on the siren to end the game, Greig Laidlaw instructed Finn Russell to quickly kick to touch so they could mount one more attack.

This showed that the game was more than just winning and was about building for the next game and onwards, trying to be positive.

Something I picked up on that will help in attack is the lines of running by the forwards receiving the ball from the scrum-half off a touchline.

Unless the ball is really quick, where there is the opportunity to punch through the defence and offload or make line breaks, I'd like to see the forward runners running 'out' lines to commit wider defenders, eliminating numbers for the next-phase strike attack.

Too often the defensive line is not being manipulated as the runners are running 'in' lines too tight to the ruck and, rather than attacking the fifth or sixth defender from the ruck, it's the second or third.

Finn Russell, in his first cap, was solid. He made his tackles and showed real confidence in his touchline kicking, not settling for a 20m gain but pushing the limits for more yardage; the forwards love that.

Blair Cowan, as every good open-side should be, was everywhere in the first half, running great support lines in particular.

He seemed to have one of those days when things weren't quite coming off but, with the rustiness gone, next week I think we'll see another step up in performance from him.

Gordy Reid was part of a very dominant first-half scrum and caught the eye in the loose a couple of times. He'll be happy with his debut.

The last debutant was Alex Allan, who entered the fray from the bench as the game deteriorated. He held his own in the scrums and will be better for the experience.

So, the positives: the tries, the victory away from home, the first-half scrum performance, the pitch that looked like an Augusta National green and the American commentators who referred to space on the pitch as "prime real estate".

The work-ons: sustained cohesion in attack, composure from kick-off receipt and line speed in defence (to shut the opposition down).

Canada will provide a sterner test next week but, with this game under the belt, a more complete performance should be expected, and indeed demanded, by Vern Cotter.