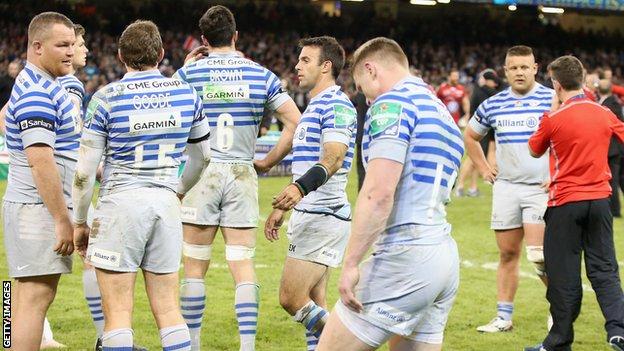 Sarries, beaten by Toulon in the Heineken Cup final, are in Pool One alongside Munster, Clermont Auvergne and Sale Sharks.

A new era in Europe

Unrest over the future of the Heineken Cup began in June 2012, when the English and French clubs announced they would quit, unhappy with qualification, revenue distribution and governance.

For much of the last year, prospects looked bleak, but European club rugby is now secure for at least eight years.

In Munster, Saracens face two-time Heineken Cup winners, while Clermont were beaten finalists in 2013 before reaching the semi-finals this year.

English champions Northampton initially missed out on being a top seed, but were placed among the Tier One teams after beating Glasgow Warriors and Castres in a pre-draw.

Harlequins are in Pool Two alongside Leinster, Castres and Wasps.

In the draw for the second-tier European Rugby Challenge Cup, London Irish were drawn alongside Cardiff Blues, Grenoble and a qualifier in the stand-out pool.

The new competitions were confirmed in April, after almost two years of negotiations.

English clubs, in particular, had long advocated change to the organisation of European rugby.