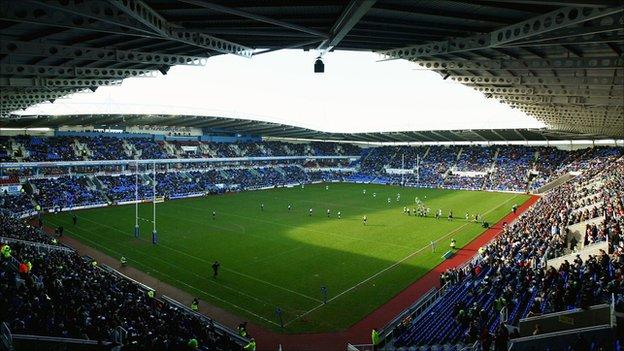 London Irish director Bob Casey believes playing in Reading can still be sustainable despite falling attendances at the Madejski Stadium.

The club were taken over by a consortium led by Powerday executive chairman Mick Crossan in December.

The group have committed to Reading Football Club's home for "the foreseeable future", and Casey feels they can attract supporters back.

"With the new owners and their drive then I don't see why it can't be sustainable. From a playing side it's a fantastic stadium and when we get the support it's a special place to be."

The Exiles are contracted to ground-share until 2025-26 but have a get-out clause to break that deal early if they wish and have been linked with Brentford's new stadium in Kew.

The Bees hope to move to the 7.6 acre site on Lionel Road from Griffin Park for the 2016-17 season. and it could give London Irish an opportunity to rebuild their fan-base in a more sustainable way.

However, Casey, who played for London Irish 233 times, and is now the club's rugby development director, believes that Reading could still represent the future home for the Exiles.

"The solution is to get the rugby right," he added. "To get the atmosphere we had four or five years ago, with the same intensity and passion and hopefully that will attract people back."

After years of budget cuts, the new consortium are investing heavily on and off the pitch with huge investment in the academy, medical centre, strength and conditioning facilities and coaching set-up.

The club will move into a new £13m training centre this summer while Steve Walsh, Andre Quinn and Brian O'Leary have been added to the backroom staff.

There will be 11 or more new players in next season's squad, although Casey did rule out another marquee signing in the mould of Australian full-back James O'Connor.

Instead the new signings will be integrated into the current squad with a huge emphasis on the academy, which will be led by former players Declan Danaher, Nick Kennedy and Paul Hodgson.

It is this academy and the investment in it that Casey believes will see the club return to the glory days of five years ago when they reached the Premiership final and Heineken Cup semi-finals.

"When you look back at when we were successful we had a real core of players coming through the academy and we want to return to that," said Casey.

"We believe if London Irish is to be successful then the academy has to be at the heartbeat of everything we do."

Integral to this "new project" is the club's director of rugby Brian Smith who Casey confirmed will be at the club next season despite being linked with a move back to Australia to coach the Queensland Reds.

Smith has been working under tight budgetary constraints since his return in March 2012 but with the new owners Casey says London Irish will be close to salary cap next season for the first time in years.

"He's done a really good under difficult circumstances, working well below the salary cap and off the field he has had to juggle things and cut budgets," said Casey.

"His work ethic is incredible and we are looking forward to him working next year with the new infrastructure around him. He has had to do everything so we want to give him all the support necessary so he can do what he does best and that is coaching."

With new investment and increased expectation at London Irish it is now hoped the days of the club's best talent leaving are finally over after several years of seeing the likes of Marland Yarde, Jamie Gibson, Anthony Watson and Jonathan Joseph picked off at will.

"We have produced some incredible players," added Casey. "They could be playing for us but they are not. You can't blame them. We have to produce a first team and club they want to be part of are proud of and we are convinced we will do that."