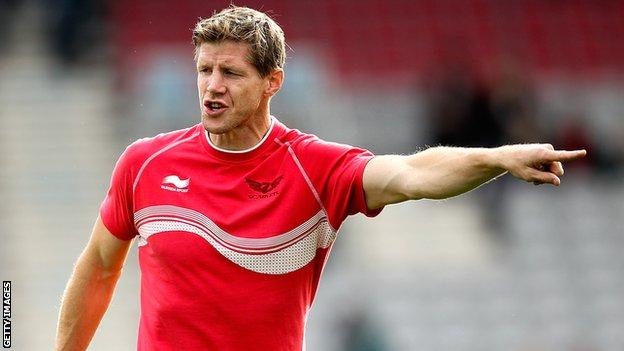 Head coach Simon Easterby believes Scarlets have been handed one of hardest draws of the inaugural European Champions Cup.

Easterby's side are in Pool 3 with Toulon, Leicester Tigers and Ulster - three former Heineken Cup champions.

"There is real quality in all the pools, but ours, along with one other, looks to be by far the hardest," he said.

Toulon, who won the final Heineken Cup with victory over Saracens in Cardiff in May, will be one of Scarlets' pool opponents.

The French side, who won the final two editions of the Heineken Cup, will have Wales full-back Leigh Halfpenny among their ranks following his move from Cardiff Blues.

"Having the back-to-back European champions is a huge challenge and going to the south of France means you are going to play in a real cauldron," said Easterby.

"Toulon have a fantastic group of players, genuine world stars, but we showed away to Racing Metro 92 last season that we could get a result in France.

"We always knew that whatever pool we were in we would have to face teams with many of the best players in the game."

"With the changes to European rugby everybody knew that what was already a very tough competition would get even tougher this season," Tandy said.

"But when you look at that draw you have to be genuinely excited. It's an awesome prospect and I can't wait to get started.

"The next key stage will be getting the fixture dates through, but whoever we play in the opening rounds, wherever we are playing, it's important that we get off to a flying start."

"We are the top-ranked team in Wales going into this competition but that won't count for anything."

The competition replaces the Amlin Challenge Cup which the Blues won in 2010 with victory over Toulon in Marseille.

The Blues, who will have Mark Hammett in charge next season, will face London Irish, Grenoble and a qualifier.

"It's an exciting draw for us and we look forward to mounting another strong European campaign," Blues defence coach Dale McIntosh said.

"As a region we have a proud history in this competition as past winners and want to build on that."

Newport Gwent Dragons, who have confirmed Kingsley Jones as head coach, have been drawn against Stade Francais Paris, Newcastle Falcons and a qualifier.

"There are some really strong teams in Pool 3 and Newcastle Falcons and Stade Francais make for some great fixtures," Jones said.

"High profile games against clubs like Stade Francais are where we want to be."