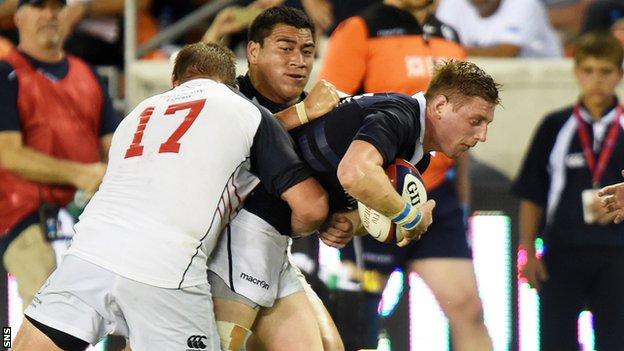 Scotland's newest fly-half Finn Russell admits he will have to continue improving despite a meteoric rise in the past few months.

Russell, 21, won his first cap in last weekend's win over the USA.

That appearance came after he moved ahead of the more experienced Ruaridh Jackson and Duncan Weir in the Glasgow Warriors pecking order.

"Now that I'm here, it's not about maintaining this, it's about getting that little bit better," he said.

"When you get to this level small margins make the differences. Hopefully this weekend I'll be able to improve and express myself.

The way that we're looking to play fits how I play

"From the weekend, there's still lots for me to improve, getting all those wee bits right."

Russell played an important role in the Warriors' run to the final of the Pro12, where they lost to Leinster after ousting Munster in the semi-finals.

"That's been really good playing at that intensity and that level.

"Coming here with Test match intensity from playing against Munster and Leinster - that's about as hard as you'll get - it's obviously been much easier rather than playing for Ayr and then coming here.

Head coach Vern Cotter was satisfied with the win over USA in his first match in charge of Scotland and Russell is enjoying working under the New Zealander's guidance.

"He's brought a lot of fun to the sessions, warm-up games have been good fun.

"The way that we're looking to play fits how I play. He gives you little pointers here and there that keep you getting better and better."

Canada are Scotland's next tour opponents, a side Cotter had described as "a step up" from the Americans'

"We need to be more clinical when we get the chances," added Russell.

"If we do that, we should hopefully be okay."