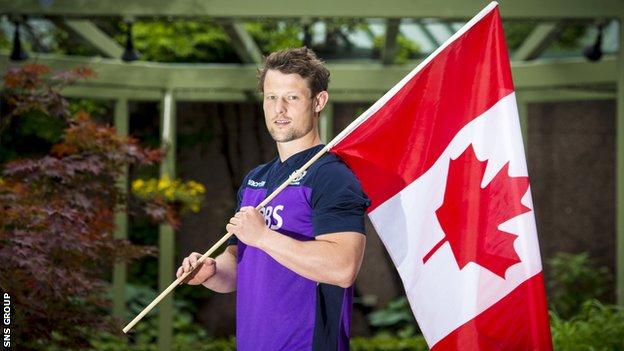 Peter Horne will make his first Scotland start in Saturday's Test against Canada in Toronto.

The Glasgow centre replaces the injured Duncan Taylor in one of four changes to the side that beat USA 24-6.

Grant Gilchrist takes Jim Hamilton's place in the second row, while prop Moray Low is in for Geoff Cross.

Kelly Brown returns to the back row for his 64th cap, with scrum-half Greig Laidlaw retaining the captaincy and Finn Russell staying at fly-half.

Russell, 21, enjoyed a promising debut in Texas along with club-mate Gordon Reid, who also keeps his place in the front row.

Horne was called up this week, along with Tim Swinson, after Taylor and Hamilton were injured against the Eagles.

The 24-year-old Fifer made two appearances as a replacement on last summer's tour. However, a knee injury sustained in his second Test against South Africa left him sidelined for nine months.

Edinburgh's Gilchrist will be winning his third cap alongside Richie Gray.

There are two further changes among the substitutes, with Alex Allan and Pat MacArthur replaced by Kyle Traynor and uncapped Glasgow hooker Kevin Bryce.

Edinburgh scrum-half Grayson Hart is the other player who could make his international debut from the bench.

Cross damaged a rib against USA but is fit enough to make the match-day squad, having stayed with the team after his father's death.

This is the fourth time Scotland have met Canada, with the visitors having won two of the three previous games.

Canada's victory came on home soil when they earned a 26-23 success in Vancouver in 2002.