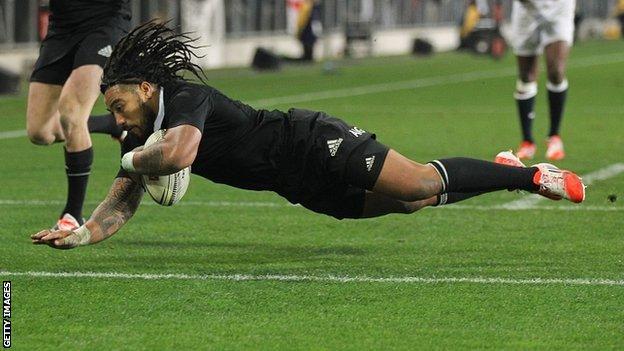 New Zealand put in a fine second-half performance to beat England in the second Test in Dunedin and clinch the three-match series.

England deservedly led 10-6 at the break, wing Marland Yarde scoring the only try of a breathtaking half.

But the All Blacks were a different side after the restart, Ben Smith, Julian Savea and Ma'a Nonu scoring tries in a 22-minute blitz.

Mike Brown and Chris Ashton scored late tries but they were mere consolations.

England, who narrowly lost last week's first Test 20-15 and have only won twice in New Zealand, play the Crusaders in Christchurch on Tuesday before the final Test in Hamilton next Saturday.

Steve Hansen's side have now won 16 Tests in a row and need only one more win to equal New Zealand's record for most consecutive wins, set between 1965 and 1969.

"I would have expected Dylan Hartley, Courtney Lawes and Billy Vunipola to come on very early in the second half. It was almost 20 minutes in before they actually came on. In that time, Julian Savea and Ben Smith scored tries.

"Had that trio been on at the start of the second half and in control of the forward play, it might not have resulted in those two tries."

The All Blacks' last defeat was by England at Twickenham in December 2012, which was also the only time they have been beaten since winning the World Cup in 2011.

England showed five changes from the side beaten in Auckland, with Billy Twelvetrees and Luther Burrell starting in the centres, Danny Care and Owen Farrell resuming their Six Nations half-back partnership and Tom Wood starting in the back-row.

And in an intriguing experiment Manu Tuilagi was shifted from outside-centre to the right wing, with Yarde switched to the opposite flank.

Farrell gave the tourists an early lead with a penalty before hooker Rob Webber was hauled down just short of the New Zealand try-line following a charge down and break by Joe Launchbury.

So often in the past England have been guilty of failing to convert territorial advantage against southern hemisphere nations and when New Zealand captain Richie McCaw launched a decisive counter-ruck it looked like the chance had gone.

However, England kept coming and when Yarde burst through a tackle by McCaw on the edge of a scrum the wing made no mistake, bouncing over for a deserved try.

New Zealand came roaring back, Nonu spinning through the England midfield and setting up an assault on the England line and Aaron Cruden knocking over the resulting penalty.

Twelvetrees made an incisive break only for Brown to pass forward to Webber before Cruden and Farrell exchanged missed penalty attempts.

During an open first 30 minutes both sides found plenty of holes in the opposition's defence, while England's poor kicking out of hand gave the hosts' back three chances to run the ball back with interest.

But when All Blacks wing Cory Jane knocked the ball on inside England's 22 shortly before half-time, Tuilagi seized on the loose ball and went screaming into New Zealand territory.

However, Tuilagi did not quite have enough pace and was hunted down by Ben Smith, who dragged him down 10 metres short of the try-line.

The All Blacks' winning streak

Cruden kicked a three-pointer on the stroke of half-time to reduce New Zealand's deficit to four points but it was England who would have been happier with their work in the first 40 minutes.

But the tourists were made to pay for over-confidence shortly after the restart. Twelvetrees attempted an optimistic offload, Cruden brought the ball clear and swung the ball wide to Savea, who passed back inside to Ben Smith for a try under the posts.

Farrell levelled things with a penalty before putting in a crucial tackle on Aaron Smith to prevent another New Zealand try. But when the ball was shovelled down the line, England's defence was shredded and Savea touched down in the corner.

New Zealand, who had shifted up two or three gears since the restart, should have had another try a couple of minutes later but Conrad Smith's pass to Liam Messam went awry.

But things got worse for England when Farrell was sent to the sin-bin for not rolling away and Beauden Barrett popped over a simple three-pointer to extend the hosts' lead to eight points.

And when Nonu stepped over for his 26th international try following a scything break by Conrad Smith, the match was effectively over as a contest.

Brown squeezed over for a try 10 minutes from the end, despite replays suggesting he failed to ground the ball, and Ashton crossed in added time but, in truth, the final scoreline flattered the tourists.

England's defeat demonstrated that while they have made great strides under Lancaster, they have much work to do if they want to challenge at next year's World Cup on home soil.