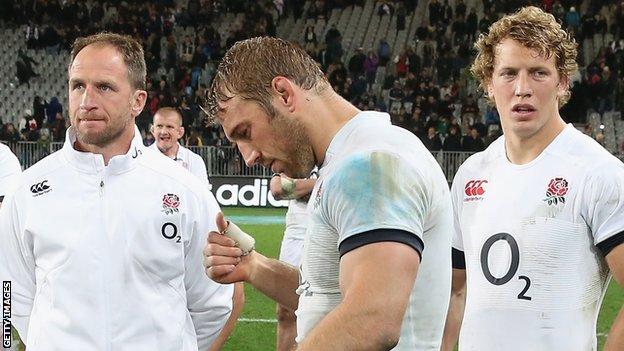 England head coach Stuart Lancaster said his side were making progress despite falling to a series defeat in New Zealand.

The All Blacks won Saturday's second Test 28-27 in Dunedin to lead the three-match series 2-0.

"Scoring three tries in Dunedin is not a bad return so we are moving in the right direction but we didn't quite finish the deal," said Lancaster.

"It was an outstanding game of rugby. The first half was full of life, the second full of skill. When New Zealand turned up the tempo in the second half, it showed they had plenty up their sleeves. For about 30 minutes of that half they showed the serious team that they are and the ability they have to create opportunities. I think we will see them one step better next week."

"It's decision-making at the highest level that we need to look at."

England deservedly led 10-6 at the break, wing Marland Yarde scoring the only try of a breathtaking half.

But New Zealand stormed into a commanding lead after the break courtesy of tries from Ben Smith, Julian Savea and Ma'a Nonu.

"There were one or two errors in our game which presented them with opportunities. But overall the positives far outweigh the negatives."

"It's no consolation, but what a game. England will be kicking themselves. We let New Zealand back in with some poor kicking. This England side is very good and I think they'll push New Zealand very hard in the third Test. I look forward to the clash next week."

"We've come a long way in the past few weeks and we'll continue to get better," said the Harlequins back row.

"It's a result-based industry and unfortunately we've had two losses and lost the series. But we've got another match to come next week and we're going to come out fighting again.''

New Zealand head coach Steve Hansen said it was an important series victory for his side over an England team he rates highly.

The All Blacks have now won 16 Tests in a row and need only one more win to equal the record for most consecutive wins, set by New Zealand between 1965 and 1969.

"We certainly played better than in the first Test but we needed to because England were a lot better, too," said Hansen.

"It was a great Test match. The ball was thrown around and everyone would have left satisfied with what they saw.

"England have always been a team we enjoy playing, particularly of late because they've been real contests. They're right up there."

England, who lost last week's first Test 20-15, play the Crusaders in Christchurch on Tuesday before the final Test in Hamilton next Saturday.