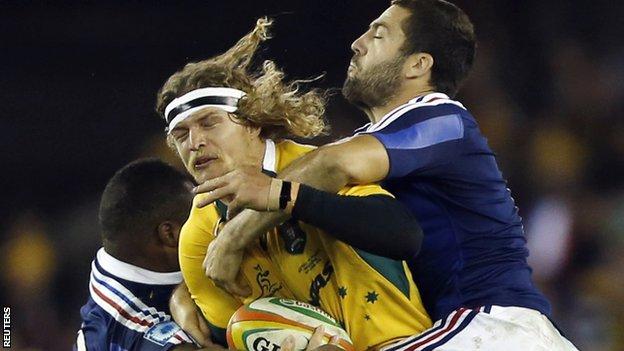 France produced a much more competitive display in the second Test but Australia still took a decisive 2-0 lead in their three-match series.

Australia thrashed the visitors 50-23 in the first Test but the first half in Melbourne ended pointless on Saturday.

Australia eventually took a 6-0 lead through a penalty apiece from Bernard Foley and Nic White.

And that was enough to give them a sixth consecutive win for the first time in nearly a decade.

It was a classic case of famine following feast with last Saturday's nine-try spectacular followed by no tries in Melbourne.

France, like England for their second Test defeat by New Zealand, were able to call on a host of first-choice players who had been involved in domestic finals that kept them out of the first Test.

And the tourists were far more resolute in defence this week, with the 0-0 half-time scoreline the first Australia had been involved in for 52 years.

After the break the hosts were clearly on top but they could not cross the French line and it took Foley and White to eventually get them on the scoreboard.

With only a six-point lead the Wallabies were always vulnerable to a late break-out by the French, who had been reduced to 14 men after Bernard le Roux was sent to the sin-bin for dragging down an attacking maul.

And although Brice Dulin and Mathieu Bastareaud gave the hosts nervous moments at the death, Australia held on.