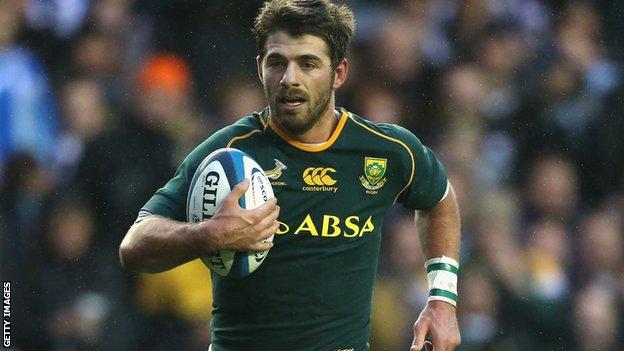 The full-back shone in the first Test and Edwards joked that he was thinking of "locking him in the toilet before the game" this time.

"We are going to have to come up with something better than what we did last time because he was absolutely outstanding," he added.

Edwards said Wales have gone "back to basics" ahead of the game in Nelspruit.

Le Roux was described as "a pain in our side at the weekend" by Edwards, who heaped praise on the Toyota Free State Cheetahs player.

"I've always been a huge fan of his, watching him in Super Rugby games and obviously he's broken into the Springbok team the last couple of years.

"He's a thinking man's rugby player and that's nice to see. In this modern game there's a lot of powerful big men who play rugby."

Edwards said Wales have gone back to basics in training ahead of the second Test after conceding five tries in Durban.

Part of this preparation is working on ways to put pressure on South Africa's big ball carriers.

"They're the biggest, most powerful team in the world and if you give them nine minutes in your 22 [as Wales did in the first Test] there's no team can hold them," said Edwards.

Edwards said he expects a few changes to the team as Wales seek to avoid a repeat of the first Test.

Wales coach Warren Gatland is expected to announce the team on Thursday.