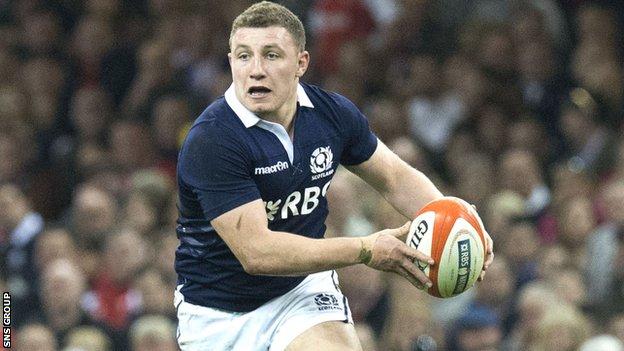 Yes, the tour is a bit bizarre; two squads playing games in three continents over a four-week period. But it's a great environment for new coach Vern Cotter to learn about his players, the players that will make up the vast majority of his World Cup 2015 squad.

The performances against USA and Canada have probably produced more questions than answers but two matches were won and those who flew back home last Sunday will have a good few months to see if they have made a significant enough first impression to merit continued selection.

So, to Argentina on Friday night. A Test match against a talented, inexperienced Pumas side who ran a strong Irish XV close two weeks' running.

Argentina have been operating with a split squad policy too. With the Rugby Championship to come in July, they have taken this opportunity to rest some front-line players.

Grant Gilchrist has been handed the captain's armband for the Scots. This shows that he is rated highly by the Scottish management as a player and leader - especially with former skipper Ross Ford a contender - but also perhaps highlights how inexperienced the XV taking the field is.

I hope he will lead from the Martin Johnson mould of "follow me." This is his natural leadership style and he has the respect of his peers - he shouldn't feel he has to speak, only when he feels it's required.

It's great to see Nick de Luca back in the number 13 jersey. He's had a tough domestic year with injury and non-selection for Edinburgh but really showed his class in the World 7's series in Glasgow.

Argentina have a fairly passive 'drift' defence using the touchline as an extra defender so De Luca's fast feet and offload ability will be key to attack.

It's a funny game. A week ago he will have been heading off to new club Biarritz in Pro D2 thinking that his international career was over. Now, he can play his way right back into contention for the World Cup.

Duncan Weir has had a strange old season too. Scotland's starting stand-off during the Six Nations, then unable to find a place in Glasgow's squad for the run in of the Pro12 campaign. He will certainly feel he has a point to prove.

He showed glimpses of his ability to manage a game during the Six Nations but international rugby is about consistency and this is where he will look to improve.

With regards to tactics, I don't think they should be too specific. Sometimes you can get caught up in different tactics for different teams and it becomes hard to decipher what a team's core principles and structures are.

From the failings in the previous two Test matches, there must be a heavy emphasis on ball retention and putting phases together. Yes, if the weather is good, the ideal is to attack the slightly wider channels where there are easier yards and then play through the defence once they are spread but the priority is building phases and pressure so I don't think it matters where or how, just as long as it happens.

Not only does this build confidence within the Scotland team but it will also help to quieten the partisan Cordoba crowd.

Defensively, coach Matt Taylor will be fed up of screaming "line speed" this week. He will want a really aggressive, in-your-face defence and, with 13 Glasgow Warriors players in the match squad, he will expect it.

It's time to lay down some markers showing what Scottish rugby is about.