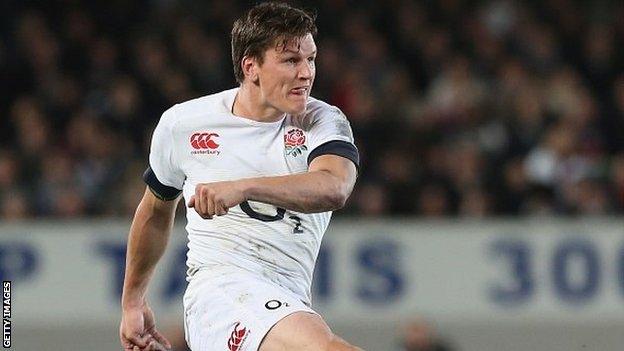 Freddie Burns will start at fly-half for England in one of seven changes to the side for Saturday's third and final Test against New Zealand in Hamilton.

Burns will replace the injured Owen Farrell and is preferred to Danny Cipriani, who starts on the bench.

The All Blacks, who lead the series 2-0, recall number eight Kieran Read while Malakai Fekitoa starts at centre.

"We feel it's right to give Freddie Burns [who started the first Test] another chance and I thought Danny Cipriani played well [in the midweek win against the Crusaders]," said England coach Stuart Lancaster.

"It was a tight call between him and Stephen Myler but I think he deserved a spot on the bench."

Youngs replaces the injured Danny Care at scrum-half, while Eastmond, who started in the first Test, is preferred to Billy Twelvetrees at inside centre.

Manu Tuilagi moves back to his usual position at outside centre following last week's experiment on the wing, with Luther Burrell dropping to the bench, while Chris Ashton comes onto the right wing in his first international start of the season.

In the forwards, hooker Hartley, lock Lawes and number eight Vunipola, who were all on the bench last week, start in place of Rob Webber, Joe Launchbury and Ben Morgan.

England captain Chris Robshaw says the tourists can still make their mark in New Zealand, even though they have already lost the three-match series.

"Only two English teams have ever come here and won so we've still got an opportunity to do something special," he said.

"We want to leave achieving something and we've got a chance to do that."

The visitors lost a tight first Test 20-15 at Eden Park, but conceded the series in a 28-27 defeat in Dunedin that was far more emphatic than the scoreline suggests.

England's previous Test wins in New Zealand came in 1973 and 2003, and it will be 2019 at the earliest before they tour there again.

"A lot of us probably won't get the opportunity to come here again as a touring party," added Robshaw. "It's a long time away until England come here next.

"We've got nothing to lose. We've very much got that backs-against-the-wall feeling, that desperation that we want to grab the win."

New Zealand number eight Read, 28, who was forced to sit out the first two Tests with lingering concussion problems, will resume his role in the back row, with Jerome Kaino switching to the blind-side in place of Liam Messam.

Coach Steve Hansen has handed a first start to 22-year-old Highlanders centre Fekitoa in place of Conrad Smith, who broke his thumb in the second Test.

The All Blacks are looking to equal the world record of 17 consecutive Test victories by a top-tier nation, having fallen inches short when they last attempted to reach the mark in 2012, drawing with Australia.

Their last defeat was by England at Twickenham in December 2012, the only time they have been beaten since winning the 2011 World Cup.

"Whilst we felt we improved from the first Test to the second, there are areas of our game we want to improve on and that has been the focus for us this week,'' Hansen said.