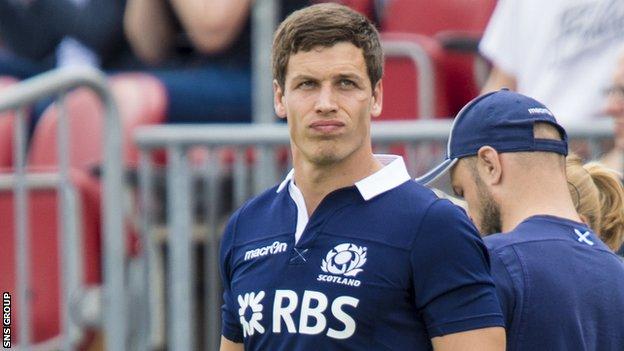 Grayson Hart may have been born more than 10,000 miles away from Scotland but will realise a childhood ambition when he makes his first international start against Argentina on Friday.

The 25-year-old Edinburgh scrum-half was raised in Kaitaia, New Zealand, and qualifies through his Glasgow-born maternal grandmother.

"I've known of my Scottish roots since I was very little," he explained.

"It's something I've worked hard for and I'm very excited."

Hart, who joined Edinburgh last summer, made his Scotland debut from the bench in last weekend's 19-17 win over Canada.

And now he has the chance to impress new head coach Vern Cotter against the Pumas in Cordoba, while making his family proud.

"I used to talk often with with my great grandmother about her time in Scotland," he told BBC Scotland.

"Living in New Zealand it was something my brother and I were very proud of and we always supported Scotland. We had a Scottish flag up in our flat during the World Cup in 2011.

You can see the ambition that we want to play with, so it's about working on the execution.

"My family are all waiting for me to send over some Scotland kit so they can wear it with pride."

Cotter split his squad in two for the summer tour, with many of those involved in the victories over USA and Canada now back home and 13 new players arriving in South America.

Hart is one of those staying on and he is anticipating a hard game, although the hosts are resting several key players ahead of next month's Rugby Championship.

"Argentina are a very respected side in world rugby," he added. "They are dangerous and play with a lot of passion, they like to have a go from anywhere.

"Personally, I'm aiming to do what I can to get the result and if any further opportunities come my way I'll be over the moon."

Jonny Gray will also be making his first Scotland start in Cordoba, having made three appearances as a substitute.

"We all know it's going to be a physical match," said the 20-year-old Glasgow lock, who is one of eight new arrivals going into the XV.

"We need to work on ball retention. You can see the ambition that we want to play with, so it's about working on the execution."

Gray will be joined in the second row by Grant Gilchrist, who has been given the captain's armband for the first time.

"I'm delighted for him," he said of the new skipper. "He's a guy who's worked really hard on his game and his work-rate on the pitch is immense.

"Everyone respects him in the team and he controls the line-out really well."