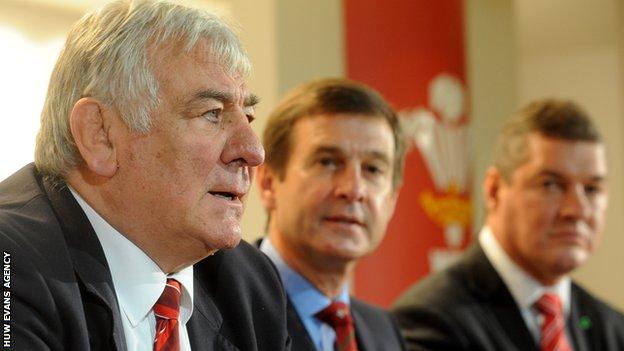 The 68-year-old will stand down immediately.

Mark Davies will continue as acting chief executive of RRW and an announcement will be made about Gallacher's successor at a later date.

Gallacher said: "I have so many people to thank for their support over the years."

He added: "It was never going to be an easy for me to finally step away from being involved in the game particularly after the challenges of the past few years - it's been my life.

"I'd hope that for the sake of everyone in Welsh Rugby that a positive and progressive new agreement will soon be reached with the WRU.

RRW chairman Nigel Short said: "We owe a big debt of gratitude to Stuart for his relentless support of Welsh Rugby and for his passionate commitment and loyalty to champion our regional game and ensure it continues to thrive.

"We all thank him wholeheartedly for all he has done and wish him a very happy and peaceful retirement with his family."

Gallacher has been involved in rugby for almost 50 years.

The back row forward joined Llanelli RFC in 1965 and played almost 200 games before moving to rugby league to play for the Bradford Bulls in 1970.

He was capped by Wales in both union and league.

After his playing career, he served as chief executive of Llanelli RFC and Scarlets and spent 16 years on the board of European Rugby Cup.

Bosses at Wales' four regions paid tribute to Gallacher and his work following the announcement.

Chairman of Cardiff Blues, Peter Thomas, described him as "a rock in Welsh Rugby" while Martyn Hazell, chairman of Newport Gwent Dragons, thanked him for his "huge contribution to the Welsh game."

Ospreys CEO Andrew Hore said: "It's fair to say that most people will never really know how much he has contributed to Welsh rugby behind the scenes and what a positive influence he has been in the game."

Scarlets director and former RRW chairman, Huw Evans, added: "He is one of Welsh rugby's brave men - he fought like a lion for the Scarlets through the troubled years when the rugby world struggled to embrace professionalism and for the Scarlets to stand alone to retain and protect its identity, heritage and tradition and again, crucially, to secure the new stadium Parc y Scarlets."