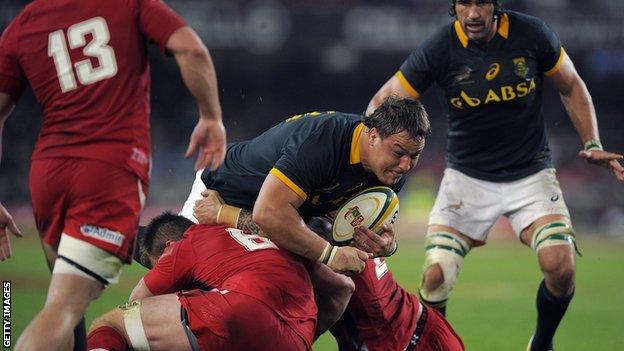 Assistant coach Rob Howley says Wales will want to end their tour of South Africa on a high in Saturday's second Test against the Springboks.

Backs coach Howley has called for a better performance in Nelspruit.

"We don't want to leave South Africa not showing them the best of Wales and that wasn't the best of us last week," he said.

Despite the heavy defeat in Durban, head coach Warren Gatland elected to make only two changes for the second Test.

Wales have dropped veteran prop Adam Jones and picked Samson Lee for the second Test with Josh Turnbull in at open-side for Aaron Shingler.

Former Wales fly-half Howley said accuracy and discipline were two areas in which the tourists needed to improve on in Nelspruit.

"It's an important game in showing Welsh supporters that we are better than we showed last week and that's the challenge for the coaches and players," Howley added

"Certainly, second up, we've always tended to get better in terms of points on the board, we need to be more competitive in all areas.

"As we understand from last week, South Africa were vastly better in the majority of areas.

"We need to be more accurate in areas of the field which gave South Africa a lot of time on the ball and we need to fix up those areas and that's what we've been trying to do," said Howley.

Howley has praised the leadership of skipper Alun Wyn Jones, tour captain in the absence of injured flanker Sam Warburton.

The Ospreys lock delivered a rousing speech to his squad ahead of the second Test, which impressed former Wales captain Howley.

"We have to make sure our attitude is spot-on this week and Alun Wyn Jones spoke superbly in the team room this morning," Howley said.

"He has been excellent taking over from Sam Warburton over the last three weeks.

"He has led maturely and says things at the right time. He is very selfless and knows the game, the way he spoke passionately about playing for Wales and what it means to him summed things up quite poignantly."