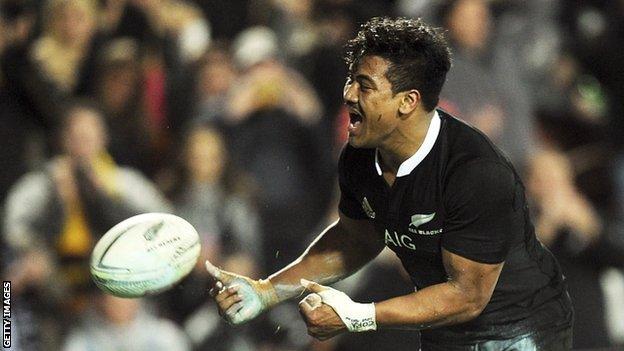 New Zealand condemned England to a 3-0 series whitewash with a chastening victory in the third Test in Hamilton.

England were far better in the second half, Marland Yarde crossing for a try before Savea completed his hat-trick.

The result means Steve Hansen's side equal the record of 17 consecutive Test victories for a top-tier nation.

They join the All Blacks team of 1965-69 and the South African side of 1997-98 and will break the record with a victory over Australia in Sydney on 16 August.

The All Blacks have not been beaten at home since South Africa won 32-29 in Hamilton in 2009 and have won 36 of their last 38 Tests, with one draw and one defeat.

Their last defeat came against England at Twickenham in December 2012, when they were beaten 38-21.

Burns had an early chance to give the tourists the lead when New Zealand number eight Kieran Read, back in the side after concussion problems, fumbled at the back of the scrum. However, Burns pulled his long-range kick left of the posts.

Shortly afterwards, England full-back Mike Brown was penalised for taking the ball back into his own 22 and New Zealand made England pay, spinning the ball left for Savea to dive over in the corner.

Burns cut the deficit with a penalty only for a rampant New Zealand to carve England open again, Savea scoring his second try after Aaron Cruden caught Kyle Eastmond out in defence.

Savea should have had a hat-trick in the opening 15 minutes, but Ben Smith's final pass was forward. However, it was a rare mistake and New Zealand looked like scoring almost every time they had the ball, despite the wet conditions.

Even England's set-piece, so solid in the first two Tests, was malfunctioning and, when Courtney Lawes dropped the ball at the line-out, Cruden popped over a three-pointer from the resulting pressure.

Sections of the New Zealand media had suggested Cruden should be replaced by Hurricanes fly-half Beauden Barrett, but the Chiefs number 10 dazzled on his home patch before the break.

Burns reduced the deficit with a penalty of his own before England number eight Billy Vunipola was sent to the sin-bin for a high tackle on Cruden.

The All Blacks' winning streak

Dane Coles almost created another try in the left-hand corner after catching England napping at the line-out, but his final pass inside bounced off Chris Ashton and into touch.

But when Cory Jane stepped through a weak tackle from Yarde and put scrum-half Aaron Smith in for a try, the match was virtually over as a contest with only 27 minutes on the clock.

Seven minutes later, England's defence was opened up again, Ben Smith gliding through a gaping hole and setting up Aaron Smith for his second try.

The hosts led 29-6 at half-time and their record 64-22 victory over England, recorded in Dunedin in 1998, looked under threat.

But whatever England head coach Stuart Lancaster said to his men during the break, it seemed to do the trick as the tourists were far more disciplined and energised after the restart.

Yarde burrowed over for England's first try after surges by Youngs and Manu Tuilagi, and the Harlequins wing left Ma'a Nonu for dead midway through the half, but ignored Luther Burrell outside him.

Yarde continued to be England's principal attacking threat and Danny Cipriani gave an eye-catching cameo at fly-half but the tourists were unable to further reduce the deficit.

And Savea prevented England from winning the second half with a try from the final move of the game - his 24th in 22 Tests and seventh in four Tests against England.